Disney's new program for people with disabilities: the scoop from Disney 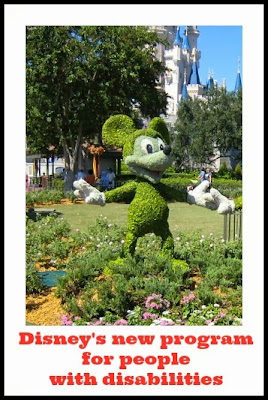 With the reveal last week of Disney's new program for people with disabilities, Disney life as special needs parents know it seemed like it was coming to an end. Tweets and comments were flying in response to a MiceAge post that Disneyland and Disney World were discontinuing the Guest Assistance Card (GAC) program and replacing it with a new system similar to the FastPass one.

I have a vested interest: We're headed to Disneyland for the first time in December. To Max, Cars Land is the Holy Land. Disney's always been wonderfully accommodating to our family, and others that have kids with special needs. The GAC has been a lifesaver. Disneyland put out a brief Q&A on the new program (my friend/ Disneyphile Ellen G. shared it). For more info I reached out to Suzi Brown, Director of Media Relations and External Communications at Disneyland.

Brown confirmed that the new system is being rolled out at Disneyland and Disney World, starting Wednesday, October 9. A Disability Access Service Card will be available to eligible guests, defined as those unable to wait in a conventional queue due to a disability (including non-visible disabilities). These guests will be assigned a specific return time for a particular attraction, and can leave the line until then.

The word on MiceAge is that guests with a disability would first obtain a pass with their photo on it. They can use it to reserve a ride time at kiosks set up around the park—one ride at a time, reportedly. If the person with the card doesn't ride, no one in the party can. Brown could not confirm details of how the program will work; Disney hasn't yet communicated it to cast members yet, she pointed out. "We've been working with Autism Speaks for quite some time now, and they have been a great partner in giving us feedback on the new system," she said, noting that it's similar to ones already in place at Universal Studios and Knott's Berry Farm.

Change is always unnerving, but especially so when it involves kids who need accommodating, a place that makes them ecstatic and a system that's worked so well for them until now. Disney is incredible for both kids and parents because it makes family trips that could otherwise be a nightmare possible. That's magic.

Like other kids with sensory issues, Max has a difficult time with waiting on lines and transitions. While the new system means we could wait elsewhere, there's a meltdown factor involved with leaving a ride, waiting around and returning to it, repeatedly throughout a day. What also remains to be seen: Whether there will be significant waits at kiosks, and whether families will have to wait on line at a ride once they return at the designated time. Kids and adults in wheelchairs who are not eligible for the Disability Access Card will be treated the same as other guests (for non-wheelchair accessible rides, they can go through the exit or Fastpass lane).

When I noted some potential challenges to Brown, including the difficulty some kids have with getting on and off lines, she had this to say: "We get that needs of individuals vary dramatically, and that one size doesn't fit all. Like we've always done, guests who have particular concerns can speak with Guest Relations about their particular needs."

I felt relieved to hear that. While the parks can't create a custom program for every child with special needs, perhaps they will come up with solutions for those kids who lose it when there's too much hustle and bustle. "We can't ask what a disability is, because of confidentiality laws, so we rely on guests to share what their needs are, and will continue to listen to those," Brown said. "We pride ourselves on listening to guests." The new program won't be set in stone: "There will be a test-and-adjust period, as we call it," Brown said.

Disney Disability Access 2.0 is in response to abuse of the current system, which made news this year. In May, the Today show did a segment on tour guides with disability passes hiring themselves out at Disneyland so visitors could bypass lines. Last week, Inside Edition exposed a scam artist selling Guest Assistance Cards to a family at the park, along with another creep who guided a family onto rides using his GAC. (Perhaps there's a Haunted Mansion in hell for these people?)

Originally, the GAC was supposed to help stop abuse. As Robert Niles of Theme Park Insider writes, "When I worked at Walt Disney World's Big Thunder Mountain Railroad, I soon lost count of the number of groups of able-bodied teenagers who rented a wheelchair and took turns riding in it in an attempt to skip as many lines as possible." With the advent of sites like craigslist, a new generation of scams became possible. The Disability Access Service Card should help stop people from making financial gains off the system, along with garden-variety jerks who abuse it—although, sadly, jerks will always find a way to do their jerk thing.

One thing's for sure: Disney has an admirable history of accommodating guests with special needs. There are wheelchairs and Electric Convenience Vehicles available for rent, special dietary offerings at most restaurants, designated relief areas for service animals, plus options for guests with hearing and visual impairment. I can't imagine that Disney would ever leave kids with special needs in the (pixie) dust.

So before we get too riled up, let's see how the system plays out. Parents of kids with special needs sure aren't shy about speaking up when something isn't working. If the realities of the new program prove too hard to handle, the parks will hear about it—and hopefully make adjustments accordingly. Disney may be a magic place but it's a business, too, and executives won't want to lose hordes of customers or get continuous bad press. Or incur the wrath of Max.

Suzi Brown couldn't confirm whether details about the new system will be posted online when it starts. Parents planning a visit can call Guest Information: (714) 781-4636 for Disneyland and (407) 824-4321 for Disney World.

It's sad to see the Guest Assistance Card go. Still, I'm taking a wait-and-see approach. As my friend Laura said, "I'm wishing for the best—upon a star, of course."