12 things I learned in First Aid that you oughta know 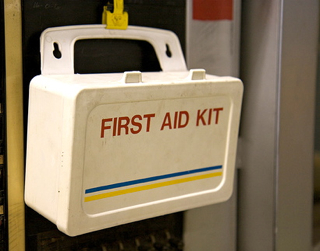 To my long list of accomplishments—including but not limited to Butt Wiper and Master Laundress—I can now add Certified in First Aid. I took the American Heart Association Basic Life Support Course for our Girl Scout troop last week, and learned a whole lot from the instructor and the Academy-Award level actors featured in the course DVD.

I picked up some really useful info, including several things that surprised me, and I'm sharing. What I'm telling you, of course, is not a substitute for actually taking the course (sorry, you don't get off that easy)! But you never know when these tips might come in handy.

It's better to use a landline to call 911
If you call from a cell phone, emergency responders likely won't be able to detect your exact location so you have to tell them where you are; that could be an issue if, say, a parent is injured and a child with speech issues is calling. Dial from a landline and your exact home address will instantly flash on the operator's screen. (Here's a good Consumer Reports article on this.)

The full dose of an Epi-Pen Jr. is TWO of them
Max has a peanut allergy so I carry around one Epi-Pen Jr from the two-pack, and keep the other at home. Wrong, as it turns out; the full dose is TWO. As in, if the injected one does not stop an anaphylactic reaction, you need to use the second pen. The info about dosage on the EpiPen site notes that up to 20 percent of patients may require a second dose. File this one under Clueless Mom Moments.

Tip the forehead forward to stop a nosebleed
Have the person sit and lean forward, then press both side of the nostrils for a few minutes until bleeding stops. If you can't stop the bleeding in about 15 minutes, it's heavy (as in, gushing blood) or the person has trouble breathing, call 911. And if your child has just bled all over your Shabby Chic sofa, call your husband and wail.

Tourniquets save lives
The instructor spoke of the tourniquets used after the Boston Marathon bombings that helped save lives by stopping blood flow. It's pretty easy to make one: Fold a cloth or cravat so it's long, and at least one-inch wide. (In Boston, they made them from t-shirts and belts.) Wrap it about two inches above the injury. Tie a half-knot, like the first part of tying your shoelaces. Place a stick, a screwdriver or something similar on the half-knot, then tie a full knot over that. Then just turn the stick to tighten the tourniquet, continue tightening until the bleeding stops then tie it again. (Here's a good YouTube video on making a tourniquet.) It's important that medical personnel know what time the tourniquet was placed; our instructor suggested writing it on the victim's forehead, so it can't be missed.

To deal with a tooth injury:
• If the tooth is just loose, have the person bite down on a piece of gauze to keep it in place and call a dentist.
• If the tooth has come out, apply pressure with gauze to stop bleeding at the empty socket, then put the tooth in a cup of milk or clean water and bring the person to a dentist or ER. Remember not to drink from the cup with the floating tooth.

To deal with a sprain:
Put a plastic bag filled with ice and water on the hurt area, with a towel between the ice-bag and skin for up to 20 minutes. Cold packs are not as effective as ice and water. Pinot Grigio may as effective for adults.

To make a simple splint:
A rolled up magazine that cradles the arm or ankle gives really effective support until you can get to a doc. An issue of Martha Stewart Living will look especially lovely. Place the magazine so that it extends beyond the injured area and supports the joints above and below. Tie with tape, gauze or cloth. Note: A pillow can also work effectively for splinting a foot or ankle. It's best to keep the shoe on—the compression helps prevent additional swelling.

To treat burns:
For small burns, run under cool but not ice-cold water until the burn doesn't hurt. Cover with a dry, nonstick dressing. Do not use ointment.

And if someone's bitten by a tick...
Using tweezers, grab the tick by its mouth or head as close to the skin as possible and lift it straight out without twisting or squeezing its body or noting how much it looks like your mother-in-law. Lift the tick until the person's skin "tents," wait for several seconds and the tick may release its grip. If someone suggests dousing the area with hydrogen peroxide, do not listen—this will force a tick to, as the instructor said, "puke its guts out into your body." You also want to save the little bugger in a plastic bag and give it to the doc, because they can test for disease.


Diabetics experiencing low blood sugar need sugar
If you're ever around a diabetic who gets woozy, pale or otherwise seems ill, immediately give them fruit juice, milk, sugar, honey or a regular soft drink, not a diet one. (Yes, it seems rather obvious that you should not give someone in need of sugar a Diet Coke, but the manual mentioned it so people must do it.)

Hope you found this helpful! I'll be quizzing you tomorrow.