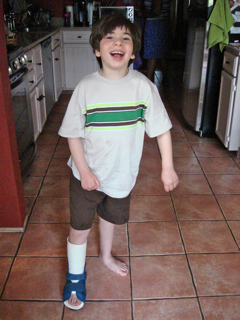 Max has been fascinated with words lately. In fact, he makes us tape little notes onto the kitchen cabinets with his food requests on them because 1) He likes to read them and 2) He is obsessed with mac and cheese and 3) He is obsessed with mac and cheese. The notes say things like "Make Max mac 'n cheese pie!" and "Max likes macaroni and cheese with ketchup." Max stands there and reads them to me, and I love it because he's making real progress with reading and because he is trying so extra-hard lately to articulate words.

Last week, I took Max to visit his physiatrist. His school physical therapist had noted that his left foot was tight, and it looked like it was turning inward again. The pediatrician had mentioned that both heel chords were tight. Me, I've noticed that lately Max has been tripping a little more than usual. He's always been a bit of a tripper, but he's been taking some real spills and miraculously hasn't hurt himself. I kept hoping his feet would right themselves, wishful thinking and I knew it.

Max had been through serial casting in the summer of 2011 for his right foot, and it worked to straighten it out. (Max's right leg and arm have the most muscle issues because the brain damage from the stroke was worse on his left side—the opposite side of your body is weakened.) Ever since that cast came off, Max has been wearing a night cast (custom-made, in purple) and Dave and I have done our best to stretch both feet.

It turns out that both feet need serial casting. I knew it had to be, but my heart sunk.

Max's walking is the miracle of my life. Anytime anything's up with it, I get unhinged. Logically, I know that he'll keep on walking, and that the serial casting will only help. But this is not a logical response. This is from-the-gut distress that takes me right back to that conference room in the NICU where the world-famous neurologist told us that Max might never walk.

Ultimately, the long-term solution will be cord- or tendon-lengthening surgery; just typing those words makes me squirm. Meanwhile, we'll start six weeks' worth of serial casting at the end of February. Every Friday, Dave or I will take the afternoon off from work and get Max to the physiatrist after school. Every week, the old cast will come off and a new, differently-angled one will go on to keep improving range of motion and straightening his feet out.

The casting itself doesn't hurt, and the staffers at the hospital are great. I'm not quite yet clear on how Max is going to deal with getting around with a cast on each foot; it's actually good for him to walk as much as possible, because it stretches his feet. But I'm figuring Max will deal in his usual cheerful, indefatigable way.

Last time he had a cast on, he was in his spaghetti phase and I had to write "Max eats spaghetti sauce!" on his cast. I'm betting this time he'll want me to inscribe "Max loves mac 'n cheese and ketchup!" or "Max loves Cars 2!"

I've got the purple Sharpie all ready. My spirits? Well, they'll get there.