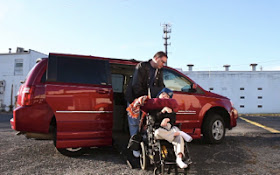 Physics teacher Jeffrey Wright is legendary for his creative classes at the Louisville, Kentucky high school where he teaches. There's one lesson, though, that particularly mesmerizes his students: The one where he shares what it's like to raise his son, Adam, 12, who has a rare disorder called Joubert syndrome that affects his brain function. Wright describes Adam as "a completely intelligent boy who can't control what his body does."

A new documentary, Wright's Law, gives a glimpse into Wright's life. Filmed by Zack Conkle, 22, a former student of Wright's, it won a gold medal in the College Photographer of the Year competition.


This jewel of a film, just 12:06 minutes long, is filled with relatable raw honesty and a whole lot of inspiration. It'll make you yearn for more teachers like Wright, not to mention parents. One Wright-ism I loved: "There's something a lot greater than energy, there's something a lot greater than entropy...love. That's what makes the 'why' we exist."
Ellen Seidman at 6:41 AM