A child with disability on the cover of Parents magazine: YES! YES! YES! 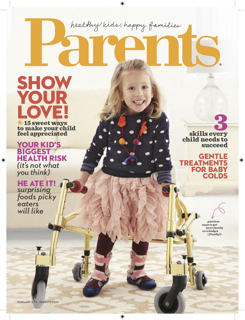 "Look, Max!" I say. I'm showing him the cover of Parents magazine, which features a super-cute little girl in foot braces holding onto a walker. Max stares at the photo for a minute and breaks into a smile. He points at the walker, then he points to himself. I know what he's saying. "Yes, Max, you used to have a walker, too!" I acknowledge.

I feel giddy: Max is seeing someone like him on the cover of a major magazine. Many, many people will also see this girl and get the message that, hel-lo, kids with different abilities are worthy cover models. They are worthy of being part of anything and everything the world has to offer.

In the past couple of years we've seen more inclusion of kids with special needs in mainstream media, including the Target and Nordstrom ads featuring Ryan Langston, who has Down syndrome; the girl with a wheelchair in last fall's Girl Scouts catalog; and the little girl with Down syndrome who became a swimsuit catalog model this past summer. But having a child with special needs as the cover model for a mainstream magazine is major. It's about time!

That kid is Emily Keicher, a 3-year-old from Buffalo, New York, who has spina bifida. The magazine found Emily through the Spina Bifida Association; her parents are active fundraisers. 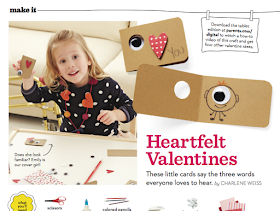 Emily in the issue's "Make It" column

Originally, Emily was only going to be featured in the Age by Age guide but when the editors saw her spark, they decided to shoot more photos for the cover and include her in the Make It column and voila, a star was born! Then again, she already was one.

Dana Points, the editor of Parents and a longtime friend and colleague, answered a bunch of questions for me here. I also did an interview with Emily's mom, Liz, over at my Parents' blog and you can hear her speak in the video below. Can you tell how excited I am? So, so, excited, and hopeful about the impact a cover like this could have.


Is Emily the first child with visible disabilities to be featured on the cover of a national magazine, do you know?
I don’t know, actually. As far as I know it’s the first time a major national parenthood magazine has featured a child with a visible disability on the cover—as opposed to a news or celebrity magazine, for example. But I wasn’t focused so much on being first as being true with our readers, many of whom have children with different abilities.
What first got you thinking about the idea?
Believe it or not, I’ve been thinking about it for more than a year. When we redesigned Parents last February, one of our goals was to bring a more real-life feel to the cover—and real kids have disabilities, visible and less visible. But it took us a while to get there. We’d included kids with disabilities occasionally in our magazine in the four years I’d been here, but I realized that we needed to involve these children beyond stories that were about their condition. They simply needed to appear in the pages, just as nondisabled kids do.

In recent years there have been a handful of kids with disabilities featured in mainstream media, including recent Target and Nordstrom ads and a Girl Scout catalog. Why do you think it's taken the media this long to include these kids?
First there is the obvious answer: that media of all kinds so often focus on portraying perfection. But in all honesty, it does take extra planning and effort to deviate from that norm. Our photo team has worked hard over the last year to make that happen. Photo shoots are typically done with models and there are not a lot of child models with disabilities. Moreover, a typical photo shoot can be tiring even for kids who aren’t disabled. So we had to be especially careful to be sensitive to that, and to things like whether the studio where we were shooting was accessible. It's also important to be true to a child's abilities—if a child with a disability isn't developmentally able to do something that would be required for the shoot, it wouldn't be right for us to fake it for the camera. Our photo director, Lily Alt, chose to photograph kids with disabilities for our table-of-contents pages, for example, because it made the process easier and more manageable for families than, say, shooting a big feature story on location outdoors.

This summer, a beautiful little girl with Down syndrome made headlines when she was chosen to be the face of a swimwear catalog. Some mused whether the company was exploiting the child for attention. What would you say to naysayers like that?
I can't speak to what the company's motivation was, but I think that in the end it's good for people to see a child with Down syndrome in a catalog, getting national attention, and doing the same thing that kids without Down syndrome do.

In what ways, if any, did meeting Emily change perceptions you may have had about children with disabilities?
I was lucky to go on set and spend a little time with Emily and interview her mom Liz for our video. Watching them together—reading a book or dancing to music—made me think of when my own sons were that little and that in turn reminded me that as parents we all have more things in common than we do things that separate us. Of course knowing how tricky it is to put on tiny tights, and then realizing that the braces must go on after that, also gave me such admiration for Liz and her husband and anyone who cares for a special-needs child. I remember how tired I was as a toddler mom, and parenting a child with special needs takes even more energy, I'm sure.

What was your favorite moment at the photo shoot?
Watching Emily dance is pretty special. Ellen DeGeneres has nothing on her!

Have you shown the cover to your kids? What was their response?
I did. I brought the issue home as soon as it arrived in the office and left it casually on the sofa to see what their reaction would be. Only my older son, who is 11, said anything and then it was, "I'm not sure her shirt and her skirt really match." What is shocking to adults doesn't phase kids—we should all take a cue from them. And our kids are growing up in a more inclusive world than we did. Progress is slow, but it happens.

OK, when can I get Max on the cover? He has really good hair. I'm only half-joking!
Ha! But seriously: We invite families to enter our Parents cover model contest every year starting in April. So everyone does have a chance to see their child on the cover. I will be interested to see if we get more submissions from parents of children with special needs in 2013 because more families will feel like their child really could end up on our cover, now that they have seen that happen.