The Connecticut shootings: What's autism got to do with it? 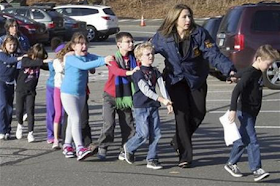 Adam Lanza, the man who killed 20 children and six adults on Friday, may have had Asperger syndrome, along with a personality disorder, some news reports are saying. I'd been weeping as I Googled about what happened, but when I read that I felt a flare of concern: Why was autism playing into this tragedy?

School shootings may be getting more common in modern-day America, but so is pointing the finger at autism as the cause—and it could hurt kids and adults with special needs like Max.


From all descriptions, Lanza had social issues. He kept to himself, didn't have a photo in the high school yearbook or a Facebook page. In a New York Times article, one classmate described him as having a "very flat affect." Yes, people with Asperger's can be like that, but it doesn't mean they are killers in the making. Asperger's may just turn out to be one component of this man, a condition such as vision impairment or cerebral palsy that has nothing to do with violence.

"Having Asperger's or the autism spectrum... does not carry any bearing on whether or not you will become—for lack of a better term—a 'good person' in this life," notes Michael John Carley, executive director of the Global and Regional Asperger Syndrome Partnership, in a statement the organization issued. "While the majority of statistics prove that we are infinitely more prone to be the victims of violence than the perpetrators of violence, we are not immune from becoming people capable of making terrible, horrible choices."


Asperger syndrome and other autism spectrum disorders are neurodevelopmental disorders, not personality disorders. People with Asperger's may be prone to behavior like aggressive outbursts and temper tantrums—but there is no proof they are prone to violence, says psychiatrist Mohammad Ghaziuddin, M.D., in his book Mental Health Aspects of Autism and Asperger Syndrome.

"Since people with a variety of psychiatric disorders, ranging from schizophrenia to conduct disorder, can behave violently it is unclear to what extent people with autism spectrum disorders should be singled out as being particularly vulnerable to offending behavior," writes Dr. Ghaziuddin, a professor of child and adolescent psychiatry who specializes in autism spectrum disorders and teaches at the University of Michigan, Ann Arbor.

He goes on to note that even when people with autism do commit violence, the underlying reason may be a psychiatric disorder, such as major depression or psychosis. In one Swedish study that compared people who committed violent or sexual offenses who had Asperger syndrome with criminals who did not, the authors concluded that violence perpetrated by someone with Asperger's is related to "similar co-occurring psychcopathology"—again, there has to be some other trigger. Drugs or substance abuse may also come into play.

The same autism finger-pointing happened with James Holmes, the man who went on a shooting rampage at a movie theater Aurora, Colorado. MSNBC host Joe Scarborough, speculating on the perpetrator, sparked widespread outrage and a change.org petition when he remarked, "Most of it has to do with mental health. You have these people that are somewhere, I believe, probably on the autism scale. I don't know if that's the case here, but if happens more often than not." Scarborough, who has a son with Asperger's, later apologized, saying he could have stated his remarks more "eloquently."

The grieving families in Connecticut want answers. So does the world at large; incidents like this shatter our security and make us fear for our children. Discussions about gun control are one thing; implicating Asperger's has far-reaching consequences for children and adults with autism and other special needs.

"I already have had family members look at me oddly since James Holmes. I am getting nervous," wrote one commenter on the autism online community Wrong Planet, in a thread labeled "NOT GOOD, Connecticut shooter was diagnosed with Aspergers." Said another, "I hope that we are not stereotyped and singled out for this crap. I have been bullied and beat up enough in my 22 years."

Max has cerebral palsy, but as his mom I worry that linking Asperger syndrome to a massacre like this only makes people more wary and fearful of those with special needs. Even if it turns out to be untrue, the damage has already been done. Kids like Max have enough social challenges to contend with. Demonizing the special needs of a murderer can create other victims: children and adults with special needs. Let our hearts grieve for the families who lost loved ones, but let's keep our heads on straight about the whys.