On not talking to your kids about the Connecticut tragedy 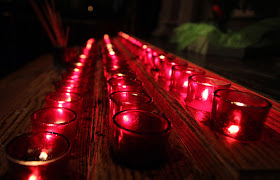 "So, did you hear about anything unusual from other kids at recess or during lunch?" I ask Sabrina when I pick her up at the bus stop. She gives me a puzzled look. "No, what do you mean?" she says. "Oh, nothing," I say, back-pedaling. Although Sabrina's school wasn't having a formal discussion with the students about the Newtown, Connecticut shootings, I'm probing to see if any talk cropped up among her friends.

Dave and I made a decision not to discuss what happened with Sabrina. While she understands what guns can do, she is just 7 and a tragedy like this is beyond her comprehension. No matter how simply we explained it or how much we reassured her, I know she'd still harbor concerns about safety in her school. We didn't turn on the news over the weekend when the kids were up or talk about the tragedy in front of them. En route to dinner Sunday night I roamed around my iPhone as the kids watched a DVD; I saw a photo on Pinterest of a little girl who died and had to choke back sobs.

Max has a naivete all his own—he doesn't yet get the ideas of guns and killing. It's given me pause, as it did with the Colorado movie theatre massacre this summer. I want him to have this level of understanding; it would mean cognitive progress. And yet, I don't want him to have this level of understanding. I want to protect his innocence while I can, like I'm doing with his little sister. (The New York Times' Motherlode blog had a helpful post on the topic).

I've felt twinges of guilt; don't the kids and adults who died deserve to be talked about? Shouldn't their memories be honored? Isn't that what their parents ache for, for their children's flames to keep flickering? As I watched one dad discuss his beautiful little girl, it was clear how much he wanted the world to know how wonderful she was.

Right now, though, this isn't something we'll be talking about with the kids... not yet. Someday. It's felt strange behaving normally around them, because I don't feel that way. My mind keeps flashing to the numerous photos I've now seen of the children and the adults who died on that Friday morning. I've been overcome with fierce urges to touch and cuddle and devour the kids with my love. I am typically over-the-top affectionate, but I've never needed to feel them so much, to know that they are here.

At bedtime last night I lay in bed next to Max, nuzzled his cheeks and thought of what those parents must be going through, though I couldn't imagine.

"Ohmmmy," Max said, bringing my mind back to the present. "Eeese!"

He was asking for a piece of American cheese, same as he does every night. It was all he wanted, and all he needed, and I got up and trudged down the stairs to get him a slice.

Image: Flickr/Kaswar_K
Ellen Seidman at 6:39 AM