One way to get better service from the insurance company when you submit your child's therapies. Maybe. 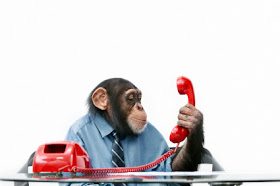 I spent a good half hour on the phone a few weeks ago with a supervisor at our insurance company, going over claims whose status was unknown. As in, I had sent in dozens of claims for Max's speech, occupational and physical therapies in the last year or so and hadn't heard back on a bunch of them.

The supervisor never called back. I left her a voicemail in which I most definitely sounded frustrated and used language like "going to have to get an attorney involved." I called another supervisor I had once spoken with and left a voicemail, too. A couple of days later, I heard back. Some claims hadn't been "keyed in correctly" (whatever that means) and needed to be reprocessed.

WHY does it have to be this hard, I wondered? With our last insurance company, I had a dedicated person I could send claims to. This company, however, insists no such arrangement can be made, and so it's representative roulette every single time. In the time I've spent talking with reps or waiting on hold to speak with a rep, I could have earned a PhD in microbiology, or something like that.

Yesterday I sent in a new batch of claims, and for good measure I added a special cover letter. Who knows if it'll help, but it sure couldn't hurt. Here it is; I refrained from sealing it with a lipstick kiss.

To Whom It May Concern,

Hello. This is Ellen Seidman, mother of Max, for whom I am submitting the attached medical claims.

Imagine this for a second: You are the parent of a child with special needs. You have many extra responsibilities on your hands, including coordinating his education plan, shuttling him to doctor appointments, coordinating his therapies and finding activities that engage him developmentally and intellectually. Then there’s all the hands-on help a child with special needs requires, everything from help with feeding to making sure he gets bathed safely and thoroughly.

Now imagine that in addition to all of the above, you are forced to spend hours on the phone with the insurance company, tracking down claims that have either not been keyed in correctly or that got lost in the system. This might cause you extra stress in your life. It would certainly take away time you could be spending helping your child.

I am that parent. And I am asking you to please do your best to process this claim correctly, so that I will not be forced to make yet another call to the insurance company.

Thank you so much for your consideration.

[OK, I didn't actually cc God but in retrospect I probably should have.]
[Or maybe I should have cc'd someone like President Obama, because they sure wouldn't want to risk putting The President of The United States on hold for twenty minutes when he called to complain on my behalf, right?]
[Or maybe Justin Bieber? Because he might impress the rep reading the mail?]
[And I for real should have cc'd my mother, because if she got wind of how the insurance company has been treating me, they'd be in BIG trouble.]
[Perhaps next time I will just send something short and sweet like PAY THE CLAIMS OR SUFFER THE CONSEQUENCES, using letters cut out from magazines so it has that powerful ransom-note effect.]
[I think spending too much time on hold listening to Muzak has maybe made me a little loopy. Where do I put in a claim for that?]
[How many insurance reps does it take to pay a claim? Four. One to lose the original claim, one to process the new claim, one to reprocess the claim when the strokes are keyed in wrong, and one to screw in the lightbulb so they can see what they are doing! HA HA HA HA HA HA HA!]
[I'm done now.]
Ellen Seidman at 6:44 AM