The kid with special football powers who's making headlines 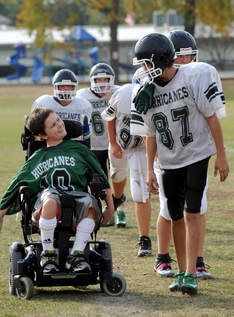 You've seen his handsome face before—maybe in the news or in the slideshow of awesome kids I did over the summer, or perhaps on his blog: I Have Cerebral Palsy...So What, I'm Still Awesome! Eighth grader Jack McGraw of St. Charles, Illinois, has been at every game and practice of his school's football team, the Hurricane Haines, in the past two years. Earlier this month, Jack made news when he scored a touchdown in the final minutes of a game.


"I felt so good," Jack wrote on his blog. There were even people crying!!! At first I didn't get why it was a big deal but people said I inspire them and that they are so proud of all the boys for treating me so great. I'm glad if I have made people feel good."

Jack's mom, Jill, shared a letter that the dad of one of the boy's on the team sent the local paper. As he wrote, "A person might think this was just about giving Jack an opportunity he normally wouldn't get. However, it was really just the Hines coaches and team (with the the help of Batavia) saying thank you to a young man who has provided inspiration and support as a teammate all throughout middle school. Contributions to a team can come in a variety of forms and truly transcend the importance of the game itself. Jack has certainly made more than his share of contributions...." 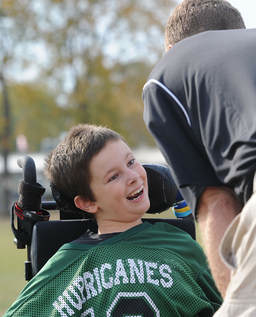 Jack, 13, attends Haines Middle School, studying the same curriculum all other kids do. He uses an ECO2 with eye-gaze technology from the Prentke Romich Company and computer for communicating doing schoolwork.

I got the chance to ask Jack a few questions; here's what he had to say.

That was one awesome touchdown! Max loved seeing it. Can you tell me when you first got interested in the game?
I first loved football when I was in first grade and the Chicago Bears played in the Super Bowl in 2007. They lost to the Colts and I was heartbroken!


What sort of things have you gotten to do as a member of the football team?
I got to call plays a few times. I mostly get to be with the team and cheer for them.

What was going through your mind when you were rolling across the field with the football in your hand?
Oh my gosh! I can't believe this is happening.

What are your favorite things to do for fun?
I like to play football and basketball with my friends. I also love to play xBox, watch movies and eat!

I love the name of your blog! What things would you like people to better understand about kids with cerebral palsy?
I want people to understand that CP isn't that bad. You can still be a regular kid if people treat you that way. We are just kids with regular feelings, too.

What would you like to do when you grow up?
I know this won't happen but I want to be in the NBA. My mom says I could do it, just not as a player. If that doesn't work out, maybe I will make a disability organization.

Is there a celebrity you'd ever like to meet?
I would love to meet Derrick Rose from the Chicago Bulls!!! He is so awesome. He is the best basketball player and was the youngest MVP ever. He actually replied to me on facebook once. It was so cool. I like him because he's really good but he is humble.

Why do kids with cerebral palsy rock?
We rock because we are awesome! We work hard and like to have fun just like everybody else. 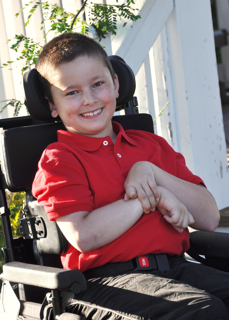 Photos/Jill McGraw
Ellen Seidman at 6:37 AM