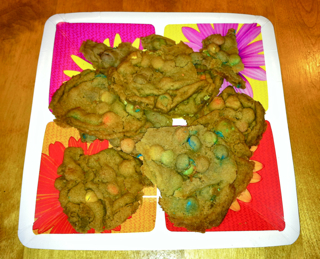 It started as an effort to help Sabrina better understand the ability of people with disability.

While the kids were in camp during our Vermont trip, Dave and I stopped by a small farmers market. I was a little bored—more maple syrup, more beaded jewelry. Then I spotted a booth with a man in a wheelchair and jars of stuff, and made a beeline for it.

The rows of Mason jars were filled with pre-measured dry ingredients for cookies, soup and even dog biscuits. Seated behind the display: Patrick, a 20-year-old with cerebral palsy who is blind, and a family friend helping him with his business, Purely Patrick. He uses a pouring device to make his mixes, and sells them at farmers markets and at the bed and breakfast his parents run in Stowe, the Brass Lantern Inn. 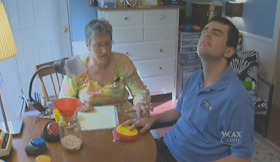 At work with his mom, Mary Anne Lewis

The M&M cookies looked particularly yummy. "Patrick, I'm going to get a jar of M&M cookies, is that a good choice?" I asked. "Mmmmmm," he said.

Before I had Max, I typically felt sorry for adults with disabilities I'd see on jobs. Now I'm both curious and inspired by them. Especially someone with a cookie business, no less. As the little card attached to the Mason jar says, "I love to listen to music, spend time outside, swing, swim and participate in adaptive skiing.... My hands 'see' what my eyes can't. I enjoy making these products, and hope you will enjoy them, too!" 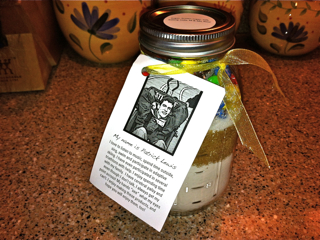 This weekend, Dave was away on business; my plan was to bake the cookies with the kids Saturday afternooon and discuss that an adult with disabilities made them. Come cookie day, only Sabrina was into it, so the two of us mixed butter, vanilla and an egg and mixed as we talked. 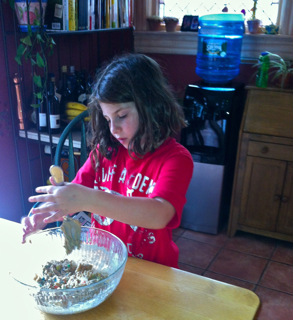 The batter was so incredibly good, we both kept sneaking mouthfuls.

I told Sabrina about Patrick, who'd made the mix, and that like Max he has cerebral palsy. "What does this tasty batter tell you about Patrick?" I asked.

She thought. "That he is good at making cookies," she said, and I was proud of her. We've had discussions about how everyone has their talents and unique traits. She knows that Max, for one, has an amazing memory, and that he's also good at playing the guitar, coloring pictures and figuring out the iPad. Then I showed her this video of Patrick. "Wow, that's cool!" she said.

The cookies were delicious; Max thought so, too. Sabrina and I started talking about who to share them with. Suddenly, I had an idea.The kids are still young to understand what happened during 9/11, but I thought that we could pay a visit to our neighborhood firefighters on the night before its 11th anniversary and share some cookies.

Last year, Sabrina learned in school about angry people who used airplanes to hurt people in buildings. I reminded her about that, and that firefighters had gotten hurt, too. "I think we should bring some cookies to the firefighters near us to show them that we appreciate the jobs that they do, and also because they may feel a little sad tomorrow," I said. And then, to help Max understand, I said, "Max, let's bring the firefighters cookies to help them feel happy."

When I got home from work last night, we headed over to the firehouse with a plateful. 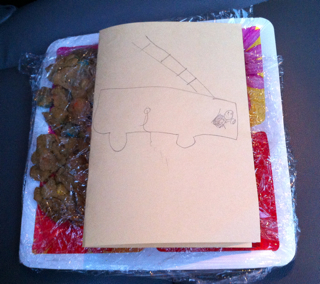 Sabrina drew this picture and wrote a note that said, "Thank you for all the hard work you do." She handed them to the firefighter who opened the door. "We just wanted to let you know we're thinking about you guys," I said. 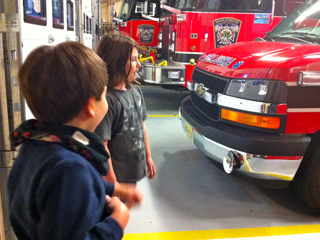 The firefighter, Tom, offered to show the kids around. 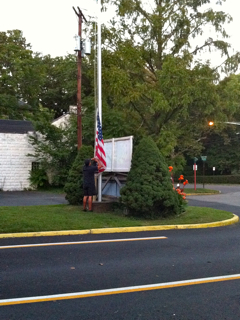 When we left, we watched a firefighter lowering the flag for the day.

"Do you think the cookies will make the firefighters feel happy?" I asked as we drove home.

"They will," I agreed, "not just because they taste good but because they show the firefighters that we are thinking about them."

Then Max pointed to his mouth to remind me that he needed cookies, too.

Today, I'm going into work a bit late so I can be in our area park at 8:46 a.m.—the minute when the first plane struck the North Tower—for a moment of silence, as I've done for the past several years. I'll say a prayer for the victims' families. Then I'll take the train to work, remembering the horror of what unfolded during my commute that Tuesday 11 years ago, when I was on a boat crossing the Hudson and saw the towers burning. I will force myself to think of the people I saw in photos jumping from the fiery buildings, because they must be remembered, including that woman in the Kelly green skirt and the workers who held hands.

Paying respect to those who keep us safe is a small start to helping the kids understand 9/11. The fact that the cookies came from Patrick made the deed just a little sweeter.
Ellen Seidman at 6:39 AM