The most exciting birthday party in the history of the world 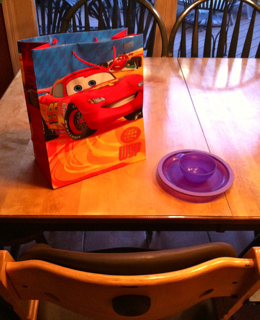 Max has been talking about his birthday party for a good month now. When I come home from work, it's the first thing we discuss; on the weekend, we go over plans every couple of hours. He's let me know exactly what he wants, and likes me to repeat exactly how the party will play out:

• We will have the party at the same kids' art studio it was held in last year
• It will be a Cars 2 party
• There will be a Cars 2 ice-cream cake with both chocolate and vanilla ice-cream
• There will be purple cups
• He will drink lots and lots of chocolate milk
• Mommy will have iced coffee, Daddy will have hot coffee, Sabrina will have lemonade
• Nobody will sing "Happy Birthday" (evidently, he remains traumatized by that).

And every time I'm done, Max flashes me this huge smile and says "Eee-yah!"

Thing is, Max's birthday isn't until December. He's aware of that, but no matter: He has plans to make. And so, I've been leading the conversational equivalent of that movie Groundhog Day.

This weekend, we were at the drugstore and he begged me to buy him a Cars birthday bag. It cost approximately $199 because it came pre-filled with red tissue paper and a bottle of Dom Perignon had curlicue ribbon dangling off it. Well, OK, there was no champagne but for the price there should have been. The second we got home, Max tossed the tissue paper and ribbon, and when he wasn't looking I salvaged them from the garbage and please don't think less of me if you get a gift from me wrapped in very wrinkled tissue paper and curlicue ribbons anytime in the near future. As the saying goes, reduce, reuse and resist the temptation to give in to your child's Cars/birthday whims.

The bag's been sitting on our kitchen table ever since, next to the purple plate and cup that have been there since the beginning of time, or at least since the start of his purple obsession (now three years, and going strong). Lightning McQueen and plastic tableware are probably not Martha Stewart's idea of a lovely place setting, but at this point I've stopped noticing them.

Granted, a birthday party fixation is easier to handle than trotting after your child as he repeatedly wheels a luggage cart around an underground garage. It is way cheaper than a car wash obsession. It is far less fattening than regularly serving up spaghetti. And, really, I should be grateful he's not asking for anything really out there, like a naked woman jumping out of a cake or something.

Still, I'm getting a wee bit weary of birthday party discussions. There is no party planner you can hire who will repeat "You will have a Cars 2 ice-cream cake with both chocolate and vanilla ice-cream!" 500 times to your child.

But hearing it is comforting to Max and makes him content.

And so, for the next three months, you can guess what we will be discussing in our house.
Ellen Seidman at 6:40 AM