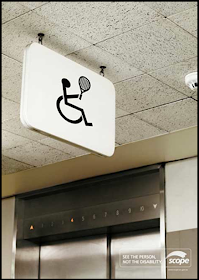 I recently found this 2007 series of Australian ads from Scope, a non-profit that provides disability services. Cool, right? 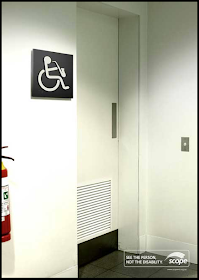 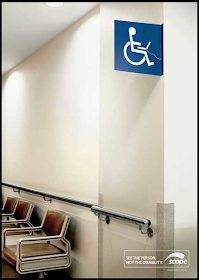 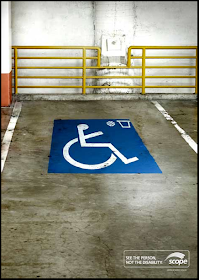 Earlier this year, Gillette Children's Hospital of Minnesota launched a Cure Pity campaign and pledge that asked people to quit pitying kids with disabilities and instead take action to improve their lives. The video below features 8-year-old Lexi Dietz who has arthrogryposis, a condition involving constriction of the joints and muscular weakness. As is clearly evident in the video, this is not a weak-willed child.

The ads below ran a couple of years ago here in the U.S., part of a Think Beyond The Label print and TV campaign financed by agencies in 30 states that provide employment, health and human services to locals who are disabilities. The goal: encourage employers to ignore labels when hiring people with disabilities. 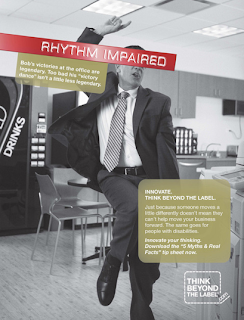 This summer Best Buddies launched a billboard awareness campaign in the New York area area featuring Rob Lowe, Cindy Crawford and Food Network star Guy Fieri paired with buddies; they hope to expand to other parts of the country. 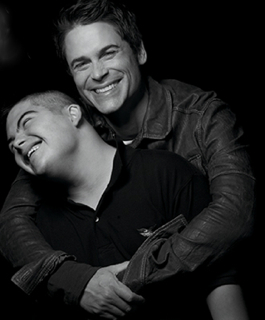 Both guys look amazing. (How is it possible Rob Lowe never ages?!) Celebs can bring a lot of good attention to a campaign. But I especially like ads that, subtly or not, play off people's perceptions of those with disabilities—and force them to reexamine their ideas. Don't pity. Look beyond the labels. See the ability behind the disability.

Obviously, ads alone won't do the trick but they're a great way to rev up a conversation that's far too quiet in our country.

I leave you with this Scope TV commercial: