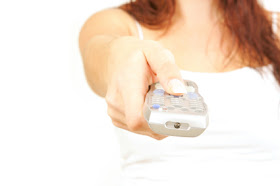 A new reality show debuts tonight, Push Girls, about four attractive women in wheelchairs who live in LA. It could raise awareness about how much women with disabilities rock, how typically shallow they can be, or both. (It's a reality show, after all.) It's on the Sundance Channel, at 10 p.m. ET.

How awesome would it be to have a reality show about special needs moms? Because we are utterly awesome and wholly fascinating and very, very feisty. Right? Think of the possibilities!

Special Needs Family goes out to dinner. At the restaurant, Kid screeches because the hostess has given them a table in the middle of a room and he only wants a corner table, where it's quiet. Once finally seated, Kid is placated with an iPad only there is no Internet connection. Kid has a secondary meltdown, and gets dirty looks from other families. Kid throws a bread roll at a nearby table. It hits another kid's head. Chaos ensues. Later, family drives home in exhausted silence. [Any resemblance to real persons, living or dead, is purely non-coincidental.]

It's that time of the year to decide on an Individualized Education Program for Kid. Special Needs Mom is seated at a table, surrounded by Kid's teachers and therapists and the district special ed coordinator. Everyone takes turns discussing Kid's progress. Mom alternatively beams and looks worried. Then Mom suggests her son needs more therapy. Chaos ensues.

Mom and Kid are in speech therapy. Kid is four years old and has never said a word. He makes sounds, and nods yes and no, but doesn't try to say words. "Come on, put your lips together," says the speech therapist. "Mmmmmm. Mmmmmm. Mommmmmy." Kid sort of says "mmm" and smiles sweetly. Mom looks dubious. Driving home, Mom slams on the brakes when a teen in a Jeep cuts her off. "SHIT!!!" she says. "ITTTTT!" says Kid. Mom turns around. "Did you just say 'shit?'" she asks. Kid nods, happily. "YEAHHHHHHHH!" says Mom. After that, every time Kids says "ITTTTT!" Mom says, "Cool! He's saying 'it!'" and looks a little guilty.

Mom and Kid are at the park. Kid has been seated on the matted floor of the jungle gym, playing with some rocks for an hour and occasionally drooling. Suddenly Mom notices another mom staring, blatantly. Mom stands up and approaches her. "I notice you're staring at my son," Mom says in a neutral, non-aggressive tone. Other Mom looks uncomfortable. "He's just a kid, you know, like any other kid," says Mom, shooting her a pointed glance. Then she flashes a peace sign and returns to her bench.

Episode 5: Mom Gets A Mani-Pedi

In this shocking episode, Mom actually gets out to have a mani-pedi.

Mom calls the insurance company. When a representative picks up, Mom explains she is calling for the fifth time to inquire about a batch of bills she sent in half a year ago that she was never reimbursed for. "I see you were asked to send in some additional information," says the rep. "Yes," says Mom,  "I mailed that information two months ago." The representative puts Mom on hold. Seventeen minutes later, she's back on the phone. "Ma'am, our system shows that those notes were received!" To which Mom replies, "OK, then why weren't the bills processed?" To which the representative says, "I can't tell you that, ma'am, but I do apologize." Mom breaks into heaving sobs. "I'm sorry, ma'am," the representative says. Mom: "Bwaaaaaaaaah."

Kid is seated at a little table in the playroom, knocking his knees up against it. Mom has asked him many times to please stop. BANG BANG BANG BANG BANG BANG BANG BANG BANG. Mom looks around, wildly. Her glance falls on a box of Ziploc bags [camera zoom]. AHA! She blows into two bags, inflating them; seals them; and attaches them to her child's knees with rubberbands. Cut to mom seated at kitchen table with glass of wine, smiling contentedly.

Mom has been having a bad week; her babysitter quit, Kid hasn't been sleeping well, and the co-pays on his anti-seizure medication have doubled. She and Kid are cruising around Target when a man approaches them. "I run a modeling agency, and I'd like to offer you a million-dollar contract—you are the face of the millenium," he says. "Sorry, sir," says Mom, "but then who will take my child to therapy?" And off she strolls with Kid and the shopping cart into the wilds of Target.

Image/istock
Ellen Seidman at 6:44 AM