Living life with my special needs mom blinders on 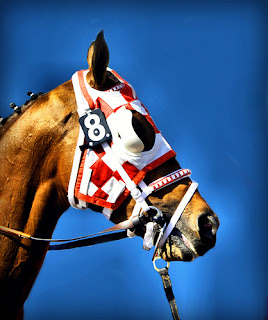 Like a race horse, I power through life with blinders on. Special needs mom blinders, actually. They help me keep my focus on Max, avoid comparing him to other kids, and not obsess about problems that may lie down the road. This, I've learned after putting my heart through the paces again and again when Max was younger. It only bred anxiety.

Will he talk?
Will he read?
Will he write?
Will he go to college?
Will he have a good job?
Will he fall in love?
Will he get married?
Will he be a dad?

I can do my best to help Max reach his potential, but no good comes of chasing answers to what he will be "like" and what he will/won't be able to do.

And so, I don't let myself think too much about challenges the cerebral palsy and brain damage may someday present. Oh, yes, I know that Max is going to be at much higher risk for seizures when he reaches teenage-dom and his hormones go wild. I know, from last summer's serial casting, that as he spurts up his leg muscles are going to keep on tightening and perhaps other ones as well. But with my trusty blinders on, I keep my sights on Max in the here and now.

The major problem with wearing blinders is that when they get knocked off, you might just freak out.

That right foot Max got serial casted has started to turn inward again. His physical therapist at school noticed it first. One day as Max was walking around the house, I saw his right foot going crooked and my heart lurched. Max was due for a new set of orthotics, though, and his therapist and I hoped they'd do the trick.

He's been in the new orthotics for a couple of weeks and I thought I saw improvement, but not consistently. Then I got an email from his PT. She's been watching his leg closely, she told me, and she thinks the problem with his foot turning inward is starting at his hip.

The therapist said it was nothing to be alarmed about, and that she just wanted to keep an eye on it and prevent it from getting to be more of an issue as Max grows.

I was totally unnerved, and scared. It was a new body part to worry about, another way the cerebral palsy may cause trouble.

I handled it in my usual way of dealing: take action. I'm trying to get an a.s.a.p. appointment with the physiatrist. I've Googled hip problems and cerebral palsy. (Says Children's Hospital of Boston, "Weak muscles do not support the bone and joints as well as they should, which can lead to scoliosis, hip dislocation and foot and ankle deformities.") Also, I ate too many Oreos.

I'm trying to not let worry get the best of me. Only my blinders are completely trained on Max's right hip. Is it moving well? Is it off? What's a hip supposed to look like, anyway, when it moves? And is that foot straight or crooked?

Image: Flickr/SamC
Ellen Seidman at 6:38 AM