On the road of special needs parenting 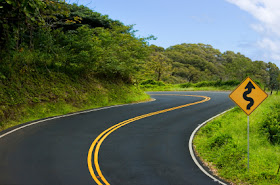 I'm driving our minivan, and Max is babbling in the backseat. I listen, happily, occasionally peeking into the rearview mirror to watch. I am not sure what he's saying, but there's intonation there and he sounds like he is having the most awesome conversation with himself. He seems to love the sound of his voice.

I sure do; for years, I never thought I'd hear it.

Max is 18 months old and I am driving him to aquatic therapy, one of the 12 sessions of therapy he gets every week. My boss lets me work at home one day a week and on Friday mornings, Max and I head to the pool at a local children's hospital. He doesn't like it so much, but the warm water helps relax his stiff muscles.

I am astounded. Max barely makes any sounds at all, none of that babbling I've heard from babies. The stroke he had at birth caused some serious brain damage. His brain is not like other kids'. That, I know. But I so want him to babble.

I am giddy. This could be the start of the babbling. He is so going to prove those NICU doctors wrong, especially the grim-faced geezer who told my husband and me that we could sign a Do Not Resuscitate if we wanted to.

For years afterward, Max doesn't make a single sound in the back seat.

"Max, do you want to get ice-cream later?" I ask from the front of the car.

I think that perhaps "Eeeyah!" is one of the best words ever. It's Max's version of "YES!" and "HELL, YEAH!" He says it so enthusiastically every time and more importantly, he says it. He has, of course, also mastered "NO." He likes to say it emphatically: "Noooooooooo." It was Max's first word.

I never knew "No" could be such a welcome word.

I've just come from an appointment at a doctor's, and I have to pull over to the side of the road because my eyes are full of tears. I am tired. Tired of spending all my free time with therapists and doctors. Tired of the hopelessness and despair and thinking that my life will never be OK again. Tired of not getting to just enjoy my cute toddler with the chubby cheeks, bright eyes and big smile. Tired. I sob for a while, Max sleeping in the back seat as cars whiz by, and then I pull out and drive on.

"Arr wah!" says Max. We've just passed a car wash, one of his favorite activities in the whole wide world.

"You want to go to the car wash?" I ask, rhetorically. Because I know the answer.

"How many times do you want to go to the car wash?" I ask, again knowing the answer full well.

I love talking with my boy. We go through the car wash twice.

Dave is driving and I am sitting in the backseat with Max. He's three. I'm reading that Dr. Seuss book Hop On Pop to him.

Max looks at me.

Max looks at me.

My heart slumps. Nothing's working—not all the speech therapy, the flash cards, the endless talking to him. The speech isn't coming. Not even sounds are coming. I put the book down on my lap and stare bleakly out the window.

I'm at home and Dave calls from the car, on speakerphone; he and Max are out running errands. I hear Max in the background, babbling. Dave and I talk, and he hangs up. Then he calls back.

It is the most beautiful word ever.

If the doctors could have told me back when Max was a baby that at 9 years old he wouldn't be fully able to speak, I would have been out of my head with sadness. A 9-year-old who couldn't talk? A 9-year-old still babbling?

Now, I am only grateful. I'm thrilled that Max has the desire to communicate, thankful for his progress and ebullient to hear him playing with sounds. No matter what lies down the road, I know he will be fine... and so will I.

No matter how much pain and despair you feel now, slowly but surely you will get to this place called "acceptance." Because as your child develops, your heart and mind will progress, too:

You will be less sad. Even though at times the hurt will still come your way, it won't be as intense as it once was.

You will quit peering into the rearview mirror of what-might-have-been.

You will stop constantly worrying about the delays and missed milestones and realize that kids with special needs travel at their own speed. There is no race.

You will stop freaking out about what lies ahead and learn to see the wonders of your child.


This is the road you will travel as the parent of a child with special needs. And things will get better as you go along. So much better.

That, I promise you.