How to ask about my child with special needs 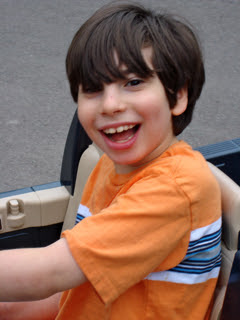 The comments on yesterday's post were absolutely, positive awesome. I hope a whole lot of other parents out there (i.e., ones who don't have kids with special needs) read them and learn from them. Heck, I learned from them. Much wisdom there.

An interesting topic came up toward the end of the day: people who ask about your child. What's the "right" way to do it? Is it appropriate? What makes you want to go "ARRRRGH?!"

First off, let's assume the question is coming from someone who does not have a child with special needs. Because there are no boundaries (for me, anyway), with other parents in the special needs universe or with adults who themselves have disabilities. It's like within ten seconds I am telling them about the brain damage and the Botox for the drool and the nasty scar I have from the c-section. OK, not that.

Let's assume we're talking about how you deal when parents of so-called typical kids or strangers ask about your child. This doesn't happen often, but I have had people say "What's wrong with him?" I've had the same reaction Jo and many of you have: WHY ARE YOU SAYING THAT? It's a suck-y question, as it focuses on the disability and assumes something is "wrong." Also, it's rude and instinctively makes you want to respond: "Nothing. What's wrong with you?!"

As Debbie put it on Jill's post, "You can ask what her diagnosis is...but when you ask me what's WRONG with my child, I will probably tell you nothing. And get defensive and sad because while she has special needs, there is nothing wrong with her." And as Natalie said, "Anyone over the age of six or so should know not to use that terminology."

In general, I think it's better to speak up than to just stare—but it all depends on how you ask the question.

I have also had people play Guess The Disability. A common one: "Oh, does he have autism?" I'll usually answer, "He has cerebal palsy." If the person keeps asking questions, I'll keep answering them. Like I said, I've learned to use these opportunities to educate and raise awareness. I want people to know that babies can have strokes, that my son is not a tragedy, and that kids with special needs are in many ways just like other kids and should be treated as such. All bets are off, though, if I'm in a pissy mood. I am not Mother Teresa. Like any mom out there, sometimes I just don't feel like talking.

The best conversations I've had with other parents who don't know us well, and even with strangers, have been the ones that have started off with some nice observation about Max—like, "He has the best smile!" Or ones that have not started off about Max, and then circled around to him. It's common sense: Once you have rapport with someone, it's easier to get personal.

So, how do you guys want to be asked about your child with special needs?
Ellen Seidman at 10:01 AM