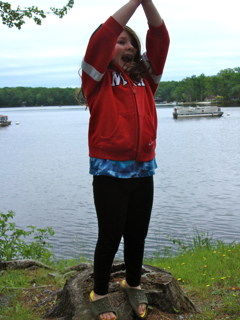 We are all about weekend getaways during the summer. Playing in the backyard, riding bikes and hanging at the pool is great, but there's nothing like a mini adventure. All four of us love road trips; it's in the kids' blood. Also, they know there is usually a lot of ice-cream involved.

We just got back from Woodloch Pines, a 1200-acre family resort in the Pocono Mountain lake region of Northeastern Pennsylvania. It's been around since 1958 although you wouldn't know it to look at it; the place is beautiful, not to mention kid heaven, not to mention parent heaven. 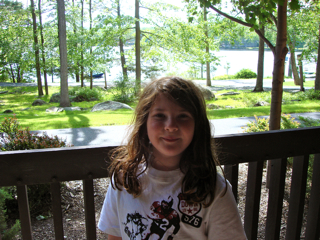 The view from our room. 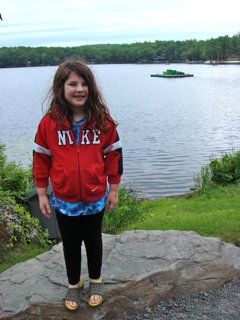 We took a lot of walks around the lake. The cast on Max's foot didn't slow him down—just the opposite. He's faster than ever in it. Still, he took lots of rides in the vans that constantly circulated the property... 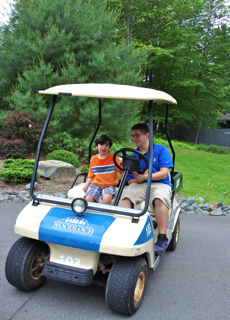 ...and in the golf carts, too. Max is hard to say no to, especially when he seats himself in the cart while the unsuspecting staffer is away and then refuses to budge when they return and flashes them his biggest smile. 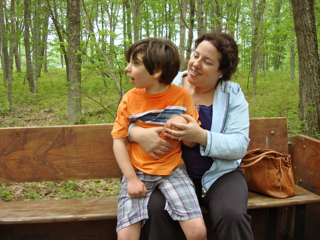 We both really enjoyed the wagon ride through a patch of woods.

Also exciting: spaghetti! For lunch and dinner! I told one of the dining room managers ahead of time that was his food of choice, and she made sure he had it, even during the outdoor lunch BBQ. The staff was beyond accommodating, both to Max and guests in general. One of the owners of the resort, John, constantly circulated during mealtime to make sure everyone was OK, and he had the best pants ever: SpongeBob ones one night, Toy Story the next. The place was packed—lots of families, and family reunions. 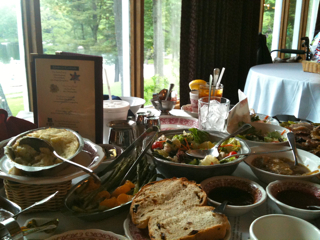 Guests dine in a gigantic dining hall (included in the fees), and the food was scrumptious. Prime rib, salmon, halibut, duck, a different variety of salad and home-baked bread every night (I ate my body weight in iced raisin bread), and kid favorites including pizza and chicken tenders. 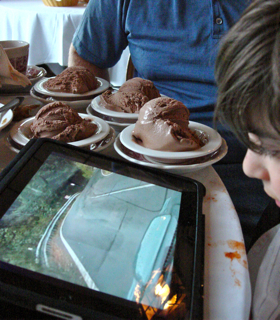 Yes, it's true, one night we let Max have four ice-creams. 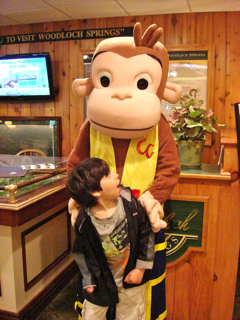 Characters greet the kids before the meals. 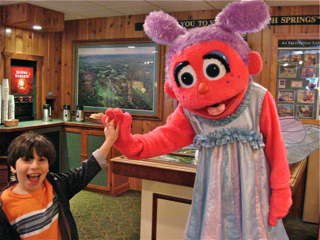 Max tried to get Abby to come have spaghetti with him, but she politely declined.

There were waaaaaay too many activities to pack into two days. 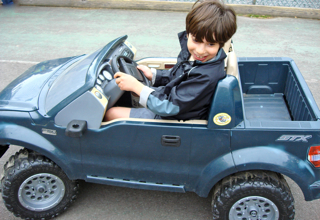 Max spent most of his time in this kiddie car—so much so that he started driving other kids around (although he did not charge them for the service). 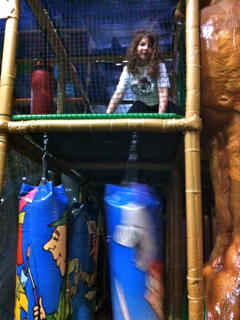 Sabrina in the indoor forest playground. 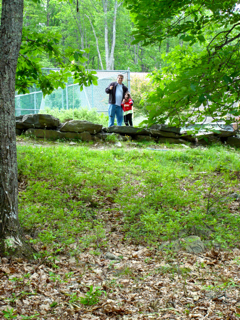 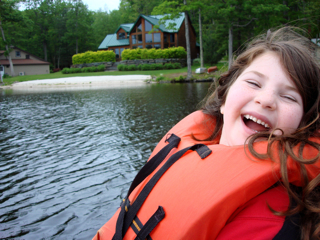 Saturday afternoon, Sabrina and I went paddle-boating. Three words: "Faaaaaaaster, Mommy! Faaaaaaaaster!" Later, she and Dave hit the indoor pool, did Bumper Boats, and then she made him take her for a paddle boat ride, too. "You were faster than Daddy," she reported afterward. Guests could also enjoy boat tours, rowboats, canoes, sailboats and kayaks, and a fun kid carnival on Saturday, complete with whoopee cushions and other prizes. 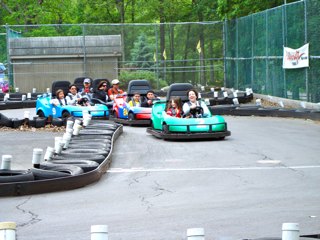 Sabrina and I went on the go-carts; Max was too scared, even though there was a purple one. 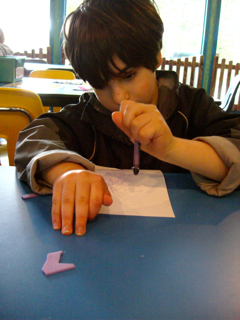 There was an arts and crafts room open all the time. 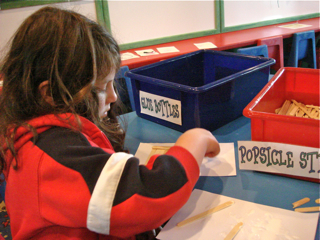 I showed Sabrina how to make a popsicle-stick box, the kind I used to make as a kid. She wanted to know what had happened to all the ice-cream that used to be on the sticks. Sunday, there were pony rides and a petting zoo. 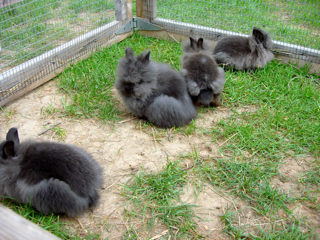 Bunnies! Not captured on film: Sabrina and Dave's bear sightings. One morning, a cub had climbed up a tree near the main lodge after raiding the garbage. A few hours later, Dave and Sabrina were walking by the lake and saw a big black bear scamper up a tree.

Activities we didn't even get to: The scavenger hunt, climbing wall, batting cage, shuffleboard, bocce, horseshoes, biking, Zumba, Zipline, waterskiing, Name That Tune, bumper cars, Dr. Balloonicus (who made all sorts of balloon creatures one night, but the kids conked out), and the theme show (we all conked out).

I hope all of you have some good mini getaways (and big ones!) planned for summer. 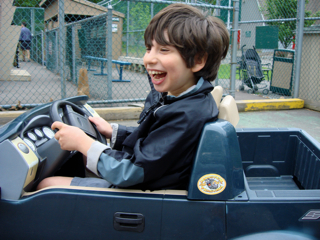