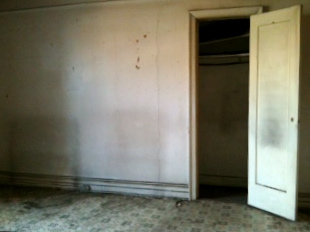 We are finally finished cleaning out my dad's place. It's been a heavy load, emotionally and physically. So much stuff in a two-bedroom apartment, so much discovered about him that I never knew, so much wrestling with grief and acceptance that I will never see him again.

One of the hardest parts of dealing with a parent's death is realizing that there are all these things you never thought to ask about. I unearthed hundreds of old letters and holiday cards from people I didn't know, wry letters from pals and sweet letters from old girlfriends. I asked my mom about one woman who seems to have been her predecessor. "She didn't smell good," was all she had to say (clearly not the most objective source).

My dad lived in that apartment for decades. He was there with his parents and when they died and he and my mom married, she moved in. There was a ton of memorabilia: my dad's grade-school notebooks and yearbooks, old ice-skates (two pairs), countless family photos, Life magazines from the 1920s and 1930s, his collection of hotel bar soaps (not nearly as fascinating as his collection of bread bag tags), slides and maps from his travels around the world. The life he had before me. It was particularly painful to see the photos of him as a child, looking so eager and ready to take on the world, and to read the "Bob, you're a great guy!" inscriptions in his college yearbook.

We donated dozens of bags of unworn clothes and unworn shoes to a charity and homeless shelter. We gave furniture to Goodwill. We hired someone to haul away an entire truckload of trash. We brought his stamp collection and boxes of mementos to my house.

Now that it's done, I'm relieved, but at times my heart literally hurts from sadness. My father died in March. Now his apartment is empty, and all that remains is memories and the boxes neatly piled up in my basement. And they just don't feel like enough.
Ellen Seidman at 7:57 AM