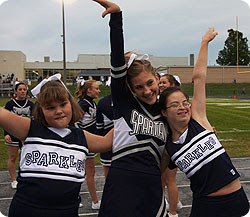 Pretty and perky: That's the typical cheerleader for you. Add "disabled," and you've described the girls in squads created through The Sparkle Effect. It's a national organization that encourages teens to include students with disabilities—including Down syndrome, autism and cerebral palsy—in high-school cheerleading programs.

Next month cofounder Sarah Cronk (above, center), a high school senior in Bettendorf, Iowa, will be receiving a Prudential Spirit of Community Award in Washington, D.C. It's the country's largest youth recognition program, so this is A Big Deal; Sarah will get an all-expenses-paid trip, $1000 and a medal (here's where teens can apply). So far, there are 27 Sparkle Effect cheerleading squads in 18 states, including the Spartan Sparkles, the one Sarah started in her hometown. Her organization has raised close to $40,000 to provide new uniforms cost-free. Rah, rah!

I recently had the pleasure of speaking with her. Although she did not have any Purple Spaghetti Max cheers on the brain, she did say a whole lot of great stuff.

What motivated you to start the Spartan Sparkles?
"My older brother has disabilities, and seeing how he was included in high school made me realize how much it changed his outlook and quality of life. Also, our team goes to The Special Olympics and cheers in the opening ceremonies. I went freshman year and thought, Why can't we do this all the time?"

Can you share more about how your older brother was "included" in school?
"He is on the autism spectrum. His transition into high school was rough—he was with a lot of kids who didn't know him, unlike in elementary school. He struggled to fit in. He got turned away from lunch tables and would sit alone. One day a junior on the swim team, Jared, invited my brother to sit with him at lunch. He also convinced my brother to join the swim team, and he got a varsity letter and made a team of new friends. Jared's inclusion of him opened the door for everyone to include him too. My brother graduated from high school very popular; he has more Facebook friends than I do! It took that one person that one day to completely change his life...and mine."

I love that story. So, how much cheering have the Spartan Sparkles done?
"They have cheered through three football and basketball seasons and three Special Olympics." 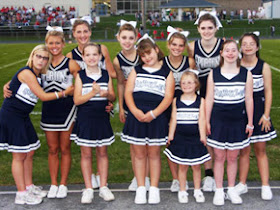 How often do they practice?
"Twice a week, for forty five minutes. The parents come to every practice, and we have a coach there."

And what reaction have the athletes had to the Sparkles?
"They have really embraced them. The Sparkles walk on the field with smiles, looking like superstars, and you can't not cheer for them. The first game, the entire stadium was on their feet, cheering."
What sort of changes have you seen in girls on the squads?
"This one girl, Alison, would come to practice wearing a different wig every week. One week she'd be Hannah Montana, and we'd have to call her that. Or she'd be a character from High School Musical or a TV show she liked. I remember the first practice she came to without a wig on. We said, 'Where is your wig today?' And she just said, 'Today, I'm Alison.' She came into her own and felt comfortable and confident with herself. That was really heartwarming."

Your team has been on TV and in People magazine. How have the girls handled the popularity?
"One girl on the spectrum, whenever I ask her what her favorite part of Sparkles is, she says, 'When I'm on the news and I become more famous-er!'"

Do the girls and the cheerleaders who coach them get close?
"We're a big family! We talk on the phone after school and go shopping together. A couple of older Sparkles are on Facebook and keep in touch that way."

Any particular challenges you've dealt with?
"Our girls are super-diverse in terms of skill level. We have some who can do several cartwheels in a row and can learn the routine once, some who have trouble speaking. We have to find a way to reach all of them on the same level—and help them all get the most out of it."

What's your ultimate goal?
"We'd like 100 squads around the country!"

I'll bet you'll get them! OK, any advice to parents of kids with special needs about how their kids can be included by fellow students?
"Have faith in typically developing teens. A lot of times teens get a bad rap for being snooty and mean. But I've seen, in my school and in other schools, how open-hearted many teens can be. We all want to feel like we're doing a good job and a good thing, and I think a lot of teens find it's easy to make that one gesture."

What effect has coaching had on the teens who do it?
"I've heard from the coaches how surprised they are by their similarities to the girls they mentor. You realize you like the same TV shows, the same movies and same outfits, and going to the same parites. There is so much more that's similar than different."
You can watch Sarah and other teens being honored at the Prudential Spirit of Community Awards ceremony on May 2 by signing up for the webcast. 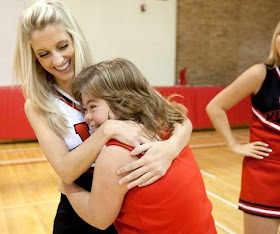