Stuff Worth Knowing About: 2/5 edition

* Poverty affects 1 in 5 kids in our country, up from 1 in 6 a few years ago. Scary. Sometimes, it's hard getting kids to understand what it means to help other kids—but small gestures can be meaningful. Save The Children ran a Valentine's card contest for kids, and they're now selling $25 boxed sets of 24 cards featuring ones by the winners and hot young celeb artistss. Earlier this week I was on a conference call with some bloggers and Save The Children spokesperson Julianne Moore, who spoke about making a difference. "You might feel like you're spinning in the wind, but it all adds up," she said. Tell the kids that money from the cards goes toward helping poor kids in the U.S. Max, Sabrina and I just bought a box. 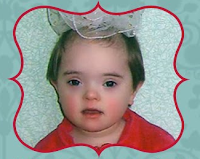 * This is Kareen, a four-year-old girl with Down Syndrome who has lived in an orphanage in Eastern Europe since birth. In her country, kids who are not adopted by the age of 4 or 5 are transferred to institutions where conditions are bleak. A very wonderful mom of three I know, Kecia, whose youngest has Down Syndrome, wants to adopt this child, but the costs of international adoption are high. So she's set up a place where people can chip in, Kareen's Journey Home. For every $10 donated, you will be entered in a drawing to win an iPad (so if you donate $50, you will get 5 chances to win). It ends today!

* Missed your calling as a rock star? No worries: Avon's having a global online singing talent search for women only; two winners will get the chance to have professionally recorded albums. Fergie's a judge! Submit your 30-second video clip by 2/13 at Avon Voices. * A new Broadway show, Sister Act, is debuting in March (yes, based on the film). They're collecting photos that will be turned into a musical montage for the song "Fabulous, Baby!" Send your pics to babyphotos@sisteractbroadway.com. This is the one I'm handing in.

* Favorite comment of the week from DDerbyDave, in response to my post on comparing our kids with special needs to other kids. Actually, this just might be one of my favorite comments ever. Dave, you rock.

I compare.
Ashley is more charming than many kids his age.
He is quicker to make friends too.
Most adults melt when they meet him.
He is more patient than other kids (and me!) and is very caring.
Many people have come over to us to tell us how gorgeous he is.
No other 5 year old inspires me daily. No other 5 year old makes me as proud to be a father and to treasure what I have, rather than what I have not got.
Yes, I compare.
Ellen Seidman at 4:12 PM