On convincing people that, yes, your kid with special needs is content 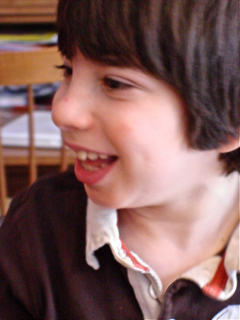 I'm on a train going home the other day and a guy sits down in the seat opposite me. We end up talking and it turns out we have a mutual friend. He asks where the kids go to school, and I tell him. He's never heard of Max's school, and I explain it's for kids with special needs.

"Can I ask what his disability is?" he says.

"He has cerebral palsy," I say.

"How does it affect him?" he asks.

I explain that Max has issues with speech and using his hands, the simplified way I usually explain cp.

"Doesn't it bother him that he can't talk like other kids can?" the guy asks.

Wow. That's bold. "No, it doesn't—because he doesn't think he's different," I say. "He tries to talk in his own way, and he has an iPad with a communication app. He plays like other kids play. He laughs like other kids laugh. His cerebral palsy does not impair his ability to be a kid!"

And then I pull out a picture of Max with his gigantic grin and show it to the guy. "Does this kid look unhappy to you?" I ask.

"No," he says, and we move on to other topics, and I'm just a little flustered at having to explain, once again, that Max's special needs are not a tragedy.

It's not just strangers. I've had conversations along these lines with friends and family. Early on in Max's life, a very close family member once wondered out loud whether the reason Max smiled a lot was because he was simple-minded. It took a few therapy sessions to get past that one.

My child is happy with who he is.