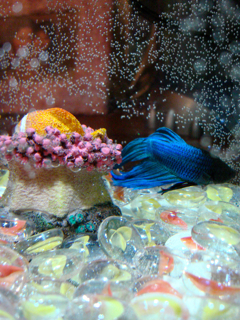 While I was at the Blissdom Conference, the kids acquired a fish. Not quite the addition to the family I'd been dreaming of while I was away, but still, a thrill.

A Siamese Fighting Fish is far less of a shock to come home to than a dog, which is what happened to my friend Jill at Scary Mommy when she went to BlogHer. Evidently, there is something about blogger conferences that inspires your family to run out and get pets while you're gone.

Sabrina's named him Puppy, which sure beats what the kids named our last fish: "Fish" (Sabrina) and "Ish" (Max). Hopefully, I won't send this little guy off to that big fishbowl in the sky. Already there was some drama today; it suddenly occurred to me at around 4:00 to ask Sabrina if she'd fed him that morning, just two pellets like she was supposed to. And then I was all wracked with guilt that it took me most of the day to remember that she was supposed to feed him. Thankfully, she did. Tonight, I caught her giving him more pellets. "He needs a bedtime snack!" she explained.

Max is mesmerized by Puppy and, miraculously, doesn't even mind that he's blue and not purple. He stands there and just watches him swimming around and around, despite Sabrina's charming habit of shrieking "DON'T TOUCH MY FISH!" Even if we manage to keep feeding him, the poor fish may drop dead of a heart attack.

I'm already thinking about who's going to keep reminding Sabrina to feed him (she is six, after all), who's going to change the water, who's going to be the one to shout "OH NO! PUPPY!" when we're halfway en route to the airport for our next vacation. It's not the responsibility, per se—it's just one more thing that I have to remember to do, because I am this household's central databank.

And now you are all thinking, This is the woman who wants a third kid?!
Ellen Seidman at 10:55 PM