A full-blown case of mom guilt 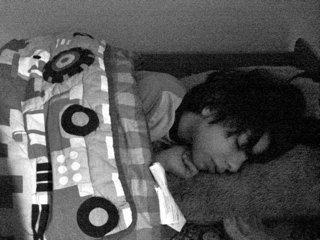 An hour ago I got home from that blog conference, gave Dave a quick peck and ran up the stairs like a madwoman. Then I tiptoed into Max's bedroom and kissed him and kissed him as he lay sleeping. He looked like he had somehow gotten older in the four days I've been away (doesn't he?). I stroked his forehead; he didn't feel like he had a fever, which was a huge relief.

This afternoon, just as my cab got to the airport in Asheville, my cell phone rang.

Every single time she calls, I think she's going to tell me Max had a seizure.

"Is it an emergency?" I asked.

That's not quite an emergency, but it's no small thing. Years ago, Max had a grand mal seizure triggered by a fever; it lasted for an hour. Whenever his fever goes over 100, we immediately give him a dose of both Children's Tylenol and Advil or Motrin.

I said it was OK to give him medication. I called Dave to make sure we had enough Tylenol and Advil at home, and Dave said he was going to get Max and take him to the doctor. Then I hung up and almost cried right there in front of the cab driver.

The guilt had been slowly creeping up on me as the weekend went by. Right after I spoke with Max on Friday and he said those two words so clearly, I was on a high. But by the next day, I was missing him and Sabrina badly. By Sunday, I was aching to see them. Then today, my flight got cancelled. I wasn't even going to make it home on time to see the kids before they went to sleep. I got booked onto another one, but there were delays and guilt, guilt, guilt. There I was, at a conference because of the blog I write about my kid, and he was home sick.

Dave called from the doctor's office. "I'm in the waiting room. Max just fell asleep on my chest," he said.
Cue the music from the Psycho shower scene where Janet Leigh gets stabbed through the curtain: That's pretty much how I felt. The doctor said Max had a bad viral infection that was going around.
The day's fun culminated in the flight attendant not being able to open the plane door when we got to the gate (though that wasn't as crazy as my friend Leticia's flight; they had to kick off four people because the plane was too heavy).

Mostly, I'm rational about taking time for myself, which I think I deserve and need. I haven't had a bad case of the guilts since the early years with Max. After I returned to work when he was born, I'd feel absolutely evil sitting at work and editing pieces on hairstyles and relationships and Dos & Dont's while the babysitter sat through therapy sessions with Max. But I had Fridays at home with him, and as Max progressed, the baaaaad-baaaaad-Mommy vibes subsided.

This weekend, though, they returned full force. Of course, I was at a mom blogger conference; there was lots of guilt to go around. I went out to dinner with one mom who was still shaken by a mishap at her little boy's daycare earlier in the day. He'd wet his pants and had no clothes to change into since she'd forgotten to bring in an extra set; her husband couldn't get over there.

Still, I felt like I was dealing with a whole other kind of guilt. A kind that I don't feel about leaving Sabrina behind. But Max? He's still so dependent on me for so many things. He really, really needs me. Especially when he's sick.

It's late. I'm tired. But I've got a raging case of guilt keeping me up.
Ellen Seidman at 1:20 AM