When Silly Bandz aren't so silly 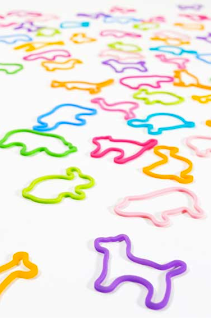 Mostly when I'm around Max, I think about the stuff he's able to do. Like the other day, he said the word "spaghetti" for the first time (it sounded like "suh-eh-hee" but I knew what he meant), and my heart did this little cartwheel. Guess what he's had for dinner the past five nights?

Every so often, though, I get tripped up by something Max is not able to do. Last night my friend Stephanie, who writes the blog Formerly Hot (for the record, she is still hot), posted this photo on Facebook of a project her girls had made. 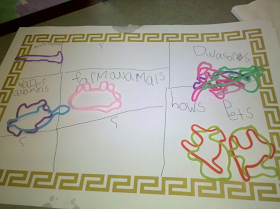 Suddenly, there I was thinking about Silly Bandz, and the fact that Max couldn't use them. They're the hottest thing in Sabrina's preschool class, and she has a few packets of them. I've been amused because it's the first collectible she's into. The first thing I ever collected as a kid, dork that I am, was stationery. Anyway, I hadn't really thought about Max and Silly Bandz until I saw Steph's photo, and realized he wouldn't be able to use them.

Max has major dexterity issues. Because he has no pincer grasp (the ability to hold an object between your thumb and pointer finger) playing with something as tiny and squiggly as Silly Bandz would be really tricky for him, if not downright frustrating.

I stared at my computer screen and pondered that. My child can't play with Silly Bandz. I mean, yes, Max has plenty of other stuff to enjoy— balls, toy trucks, Shrek figures, purple whatever—but these animal-shape rubberbands are not a possibility. And just for a moment, it seemed so quintessentially wrong that a child would not be able to enjoy a simple thing like Silly Bandz.

Sometimes, those little special-needs shocks to the system just sneak up on you.
Ellen Seidman at 12:03 AM