A book that makes it clear how awesome our kids are 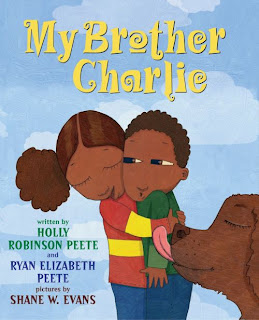 I'm feeling a little weepy tonight, because I keep going back and reading the comments from the last two days' posts on the guilt we feel about our children's disabilities. Like I said, I don't place a whole lot of blame on myself, but it's clear many of you do, and that is one serious weight to bear. I'll have more to say about that next week.

Today, I have something really cool—and not at all depressing!—to tell you about. Actually, it's downright inspirational. A few weeks ago, I found out that actress Holly Robinson Peete, a mother of four and national autism spokesperson, wrote a book with her daughter Ryan called My Brother Charlie. Ryan's twin brother, RJ, has autism; they're 12. The book mirrors their lives: It's written from the p.o.v. of a girl, Callie, whose twin brother has autism, but it's helpful for any family with a child who has special needs.

I received a review copy in honor of National Autism Awareness Month and read it to Sabrina and Max several times in recent weeks. The first time, I was only a few pages into the story when Sabrina asked, "Does that boy talk?" I answered, "He can, but he doesn't do it all the time." She said, "Like Max?" and I said, "Max can also talk, he just does it in his own way." I loved that this book sparked conversation. Sabrina only occasionally asks stuff about Max or makes comments, and usually they're of the "Ewww, he's drooling" variety, but I know she's processing a lot about him in that head of hers. When I directly ask her questions she doesn't like to talk, so having a book like this is really helpful.

Max kept gesturing at Charlie and saying "MAX!" then he'd touch the girl's picture and say "Sa" ( for Sabrina). He was totally drawn to the illustrations, which are gloriously colorful, big and eye-catching. 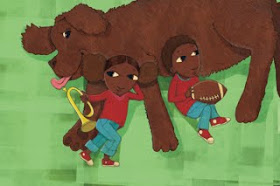 Sabrina was mildly obsessed with why the twins in the book were dressed alike. I think she saw kindred spirits because she still only wants to wear Max's clothes.

The book is really sweet and clear; it explains, in a very basic way, that kids with autism are sometimes quiet and want to be alone—but also makes it clear that like other kids, they enjoy having a good time. And that they have their own way of saying "I love you." Which, as we all know, is very true.

I have three of the books to give away, including one copy autographed by Holly Robinson Peete, each worth $17. To enter, leave a comment below. Any kind will do. And if your e-mail is not apparent on your blog, please mention it your comment so I can get in touch with you if you win.

This giveaway is open until Thursday, April 22, 11:59 p.m. EST, and is for U.S. and Canadian residents. I'll pick the winners via randomizer.org, announce the winners the next day, and alert you by e-mail. 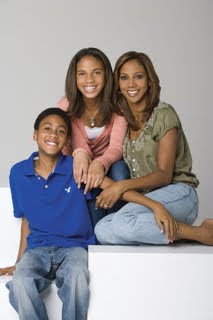 Thanks to Holly Robinson Peete and her daughter (above, with RJ) for a great book. They are one beautiful family.

Update: And the winners are Witkowski Family (they get the autographed copy), Pia and remarker/fcffollower. Enjoy the book!