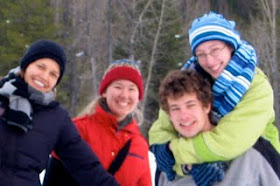 I don't remember how I first connected with Sarah (that's her above, with some friends), but I do remember being wowed by her from the start. She writes the blog Stand Tall Through Everything, and she's smart, sensible, cool, funny, real. She has cerebral palsy and she's reminded me, on more than one occasion, not to be get too bummed about Max's disabilities. She always includes cool quotes at the end of her e-mails; I loved this one by Maya Angelou: "I've learned that people will forget what you said, people will forget what you did, but people will never forget how you made them feel." Read what Sarah has to say and you'll find her pretty unforgettable.

OK, tell everyone a little bit about yourself.
I’m 26. Right now I’m a supervisor for a polling institute, but I’ve been a nanny, office assistant, and missionary at different points in my life. I have a B.A. in drama and certificate in pastoral ministry. I tell people I have two degrees that ensure I’ll make no many for the rest of my life. Right now I’m living at home, but I have lived on my own in the past and don't plan on living at home long term. I went away for college and lived on the west coast for a year post college, I did a year of service in Washington State (my second home). I have friends all over the world, and a fair amount in convents, so my social life often consists of e-mails, text messages, calls, and snail mail. But it just makes things that much more special when I do get to see people. Plus I get to know who my friends really are since it takes more of an effort to stay in touch these days. I tend to keep things low key, like watching a movie or getting a pizza. Any “big” or “crazy” fun activity I take part in with friends is usually their idea, I’ll either agree to it or think of something better. When I’m alone I’ll usually watch a movie, read a book, or write. I’m an only child so I can pretty easily entertain myself. Right now my days are filled with post-op rehab and working. In September I had pins and plates put into my hips bilaterally and right ankle to correct bad alignment, which will hopefully delay the effects of arthritis and eliminate the need for future joint replacement.

Can you share a little bit about your cp, and what kind of therapy was most helpful for you growing up?
I have spastic diplegia cp. I was born prematurely at 32 weeks. I was diagnosed some time after my first birthday. It’s not something my parents and I have ever sat down and discussed. Growing up there weren’t as many therapies available as there are now, or at least they weren’t as well known. I would say “typical” physical therapy was most helpful since it’s the only thing I really went for. People would try to get me involved in different programs combining sports and pt for socialization and exercise, but I never really felt like I belonged there so nothing lasted longer than a day or two. I often did things “normal” kids did like play in the woods and take swim lessons. Those kinds of things were helpful, too; even though they weren’t used as therapy they did have their benefits. I could swim better than some of my friends growing up, and still can!

How has having cp affected your life, do you think?
I would like to say it's had no effect on my life but that would be horribly optimistic, and maybe delusional. Let me put it this way, as often as I find myself hating having cp, I know I wouldn’t be who I am without it, so it’s hard for me to say I wish I didn’t have it because it would make me a completely different person.

And what's been your biggest challenge?
That’s hard for me to say, once I think I’m met or overcome my biggest challenge another one comes my way. So I guess you could say life is my biggest challenge, but I think that’s true for most people, whether they realize it or not. It’s hard to say how I deal with physical challenges because I’m never really sure how I’ll deal with them until they’re already dealt with. You eventually know what you’ll have trouble with and you have two choices: (1) Stay away from it, or (2) Find a way to deal with it. When I’m in a new situation I usually have a friend or someone with me, because that’s just how I prefer new things. If I’m on my own, which has to happen now and again, I try to prepare for the worst and hope for the best. But there are going to be things I just won’t be able to do, that’s it.

What's your biggest aspiration?
As cheesy as this is going to sound, my biggest aspiration is to be happy, whatever that involves. Although getting my debt paid off and having insurance would be pretty great :)

What advice would you have for parents raising kids with cp?
If your kid has cp they’re no different than any other kid, at least from their perspective. They know nothing else other than life with cp, even if they have siblings. I don’t see myself as someone with cp, at least not at first, and even then it takes someone pointing it out to make me see it. One of the biggest things that bothers me about parents of cp kids is when I hear them say things like, “I wish you could be normal,” or “Now you can be a normal kid.” It really makes my skin crawl. Once, while I was watching something on Discovery Health—I’m a Discovery Health junkie—this kid who was maybe 4 and had cp was having tendon lengthenings. Having had tendon lengthenings myself, I was interested to see the actual procedure done. This kid wasn’t even discharged from the hospital and his mom was crying—I mean bawling—because now he could be like “every normal boy” and I’m thinking...well I won’t tell you exactly what I thought since I’m sure you’d like to keep this at least PG-13! But basically it was, “That’s a lot of pressure to put on a kid who is barely out of an OR” especially since his normal isn’t “everyone’s” normal. It’s like trying to put a round peg in a square hole. As hard as this is to hear (well, read), the best thing you can do for your child (and yourself) is let go of your perspective of how your child could be and focus on who your child is. Everyone has gifts, talents, faults, and failures, disability or not. The only difference is, if there is one, is the differences are more obvious. I’ll never be a marathon runner, that’s pretty darn clear, but not everyone is meant to be one either. I can guarantee you though that having a disability gives you gifts that the non-disabled don’t have and won’t ever have.
Ellen Seidman at 12:05 AM