Makes me happy to just look at this 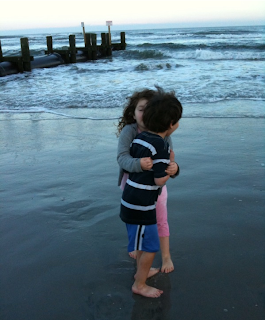 ...and I need that happiness because during these last two snow days, the kids have been fighting, pulling hair, hitting and yelling stuff at each other like "AAAAARGH!" (Max) and "I DON'T LIKE YOU ANYMORE!" (Sabrina). Max has one advantage over Sabrina, which is that he can easily grab hold of her hair and prevent her from moving until I pry his fingers off (and he has the world's tightest grip, mostly because of the cerebral palsy but partly, I am sure, because of his determination to exact revenge).

Watching them brings back memories of fighting with my sister and all I can say is, it's a wonder we each still have two eyeballs and all of our teeth.

Dave dug up this photo from the depths of his iPhone, taken when we were at the shore in September. Do you think it would help to print it out and wave it in the kids' faces the next time they are engaged in battle? I am only half-joking here.
Ellen Seidman at 12:06 AM