Oh, right, I have a child with cerebral palsy 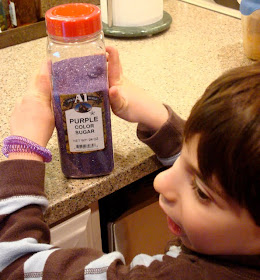 I don't spend much time thinking about the fact that Max has cerebral palsy. It tends to sock me in the gut at random moments. Like today, when the world's biggest bottle of purple sugar arrived in the mail. Max likes the stuff sprinkled on practically everything he eats, and we were almost out of the container of purple sugar I'd gotten at Target around Halloween. I was so excited to find some online, so excited to see the look on Max's when I opened the package.

He squealed. Then he tried to pick up the plastic bottle with both hands, only he couldn't quite grasp it and it tumbled to the floor. He tried again, and again, but the bottle kept falling.

I felt so frustrated for him.

Every so often, though, it hits me that Max has cerebral palsy.

Like last week, when Max cried out in the middle of the night and I ran to his bed and saw that he had one arm pinned beneath his stomach because he was unable to lift himself off it.

Like a few months ago, when Max was walking down the stairs and trying hard to grasp the railing with one hand and mine with the other, only he lost his balance and almost tumbled all the way down.

Like when Sabrina was clambering over the couch recently and Max went to do it too only he couldn't get his legs to lift high enough and he couldn't pull himself up but he so wanted to.

The emotions that wash over me at times like these are a complex mix of sadness, distress, despair, anger. They're fleeting, though, because the very next moment I am focused on repositioning Max in bed or pulling him back so he doesn't fall down the stairs or helping him clamber over the couch and giggling with him.

But, mostly, I don't think about the cerebral palsy.

Only at certain moments like these.
Ellen Seidman at 1:25 AM