The single Army mom who refused to deploy 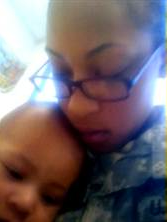 Today, I read about the Army mom who refused to deploy to Afghanistan because she had nobody to care for her 10-month-old boy. As a result, she might face criminal charges. Alexis Hutchinson, 21, says the only family she had who could pitch in, her mom, was already caring for other relatives with healthy problems. According to her lawyer, one of her superiors knew about the situation, and said she'd have to deploy anyway—and put her son in foster care.

So Hutchinson, an Army cook, didn't show up for her flight.

An Army spokesperson's response: He didn't know what her commander had told her, but they wouldn't deploy a single mom without childcare.

The facts are still emerging with this story. But it's disturbing, isn't it?

It makes you think. About all the deployed moms and dads. And the sad state of childcare in our country. And what you'd do if you were in a similar situation.

I probably wouldn't have shown up, either.
Ellen Seidman at 12:04 AM