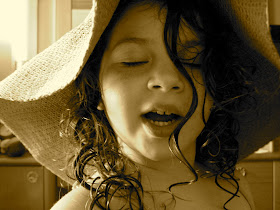 This week's contest over at I Heart Faces is sepia toned, once again I couldn't resist an entry. Here's my little blabbermouth, Sabrina, mid-sentence. She asks a million questions every day. She makes a million observations. She provides running commentary on our lives, every second she is awake. She's been known to occasionally murmur in her sleep.

I adore her patter, no matter what she is saying, both because it's usually amusing and because it's miraculous to hear her speech developing, given the significant challenges her big brother faces. I think she's been a major influence in getting Max to say more words, including key ones such as "ice-cream" and "doo doo." It's no coincidence that when we were on the Disney Cruise, the kids club gave her the "Best Big Sister" award, even though she is really the little sister.

Sabrina helps Max in all sorts of ways. Tonight, the kids were drinking water and Sabrina taught Max to blow bubbles into his cup. That may not seem like a big deal—um, actually, that may seem like something you do not want your kids to learn to do—but Max has issues breathing out (something that is critical to master for speech), and so that was great to see. When she said "Blow!", Max repeated "Woah!" He's still working on those consonants.