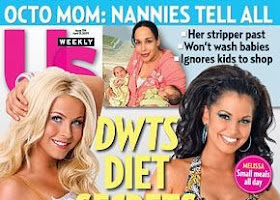 We were at Target today, and octo-mom Nadya Suleman was the main theme of the magazines at the checkout counter. One had an article about how the nannies she'd gotten through Angels in Waiting were saying she was never there for her babies and that she just liked to shop. Another featured recent photos of her with a few babies. Another had a piece on her bringing home the seventh octuplet from the hospital.

Every single time I read something about her, it gets to me. It's hard to cough up anything but contempt for a woman who chose to have all those embryos implanted in her, but I feel for her babies. Who have real possibilities of having developmental issues because they were born so prematurely.

Did nobody tell her that was a risk? Or did she not listen?
Ellen Seidman at 10:33 AM