What happened to Max: The day we found out that babies can have strokes 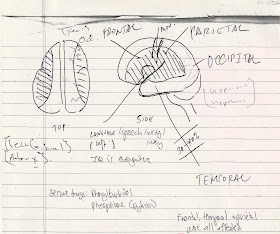 When the doctor at the elevator bank told us that Max was having seizures, I started sobbing. Then I saw Max in the NICU for the first time, and it took every ounce of control I had to not get hysterical. He was unconscious, with tubes and wires everywhere and a machine monitoring his vital signs. He was getting heavy doses of two different anti-seizure medications. It didn't make sense—he was just as pink and perfect-looking as he'd been in the delivery room, all 7.11 pounds of him. The other babies were teeny-tiny preemies, jaundiced newborns, babies recovering from heart surgery. What was Max doing there?

We learned that a resident had noticed one of Max's feet twitching. When they hooked him up to a monitor, they discovered his brain was constantly seizing.

We sat there in the NICU next to Max's incubator for the longest time. An NICU, if you've never been in one, is relatively calm-seeming for a place where so many babies are on the brink. Neat rows of incubators, nurses moving with efficiency, the silence broken only by the occasional beeping monitor or weepy parent.

I felt terrible leaving Max there, but eventually we headed back to our room, completely drained. We had to get through what felt like a gauntlet of new mothers strolling around with their infants.

We walked into the room. A couple of friends had sent a huge blue-and-white "IT'S A BOY! CONGRATULATIONS!" flower arrangement. We took one look, collapsed into separate chairs and cried. Straight-from-the-gut, heaving sobs and wails. We got into bed, held each other and cried some more. There was nothing to be said.

There was a chance Max had a metabolic disorder, we were told. They put a rush on the tests. I kept asking, "If it's a metabolic disorder, can it be treated?" Some could, they said. That little bit of hope got us through the next few days. We fended off phone calls from friends who called to congratulate us, although I broke down and told one that Max was having seizures, and we cried together. We told our families that Max was having trouble breathing, that he was under observation, and left it at that.

Friday morning was the MRI. A few hours later, the doctors were ready to talk. As I walked out of the elevator, I saw a group of them standing there. Pediatric neurologists, one of them a founding father of the field and on the elderly side. I stared at him, searching for a sign. He sort of waved at me, which I considered reassuring. You don't just wave at someone unless you have decent news to report, I figured. In those last minutes before we learned the truth, I was clinging to any hope there was to cling to. "Please, please, please, let it just be a metabolic disorder," I mumbled to Dave. "Please please please please please."

A nurse brought us into a room next to the NICU. Dave and I sat down on folding chairs at the end of a long table, held hands and waited for the doctors. They came in and took their places across from us.

"Your baby has had a stroke," he said.

I gasped. "Babies can have strokes?" I said.

He proceeded to tell us that yes, Max had a stroke. A bilateral stroke, meaning it had struck both sides of his brain. It was a large stroke. A "significant event."

"What does this mean?" I asked. I didn't even think to ask how it had happened; I just wanted to know what the future held for Max.

That is when the doctor drew the above sketch. He showed us the different parts of the brain that had been affected—the parietal, temporal and occipital lobes. We were lucky the brain stem had been spared, as that area handles many of the body's primary functions, including breathing and heart rate. I don't believe he ever used the words "brain damage," though that is exactly what had happened. He explained that, as a result of where the stroke had hit, Max might have severe cognitive impairment. That he might not walk. That he might not talk. That he could have vision and hearing problems.

It wasn't just one nightmare scenario. It was every single one.

I didn't even cry; I was too numb. Dave folded his arms on the table and buried his head in them. He's usually such a happy-go-lucky guy, one of the things I've always adored about him. Seeing him stricken with grief made mine that much worse.

The next words that came out of my mouth were so raw, it's hard to believe now that I actually said them. But I did.

"I don't want a handicapped child," I blurted.

"Well," the doctor said, "you could sign a Do Not Resuscitate."

We hadn't even known there was a possibility that Max could die.

After the older doctor left, the young pediatric neurologist and the other one, a woman from Italy doing a fellowship, sat with us. The young doctor told us that babies' brains are malleable. "Plastic" was the word he used. He said that Max's brain had the chance to regenerate, and that while the stroke was severe we should have hope. Because Max needed us to have hope. The other doctor pressed a card into my hand. I think it was an image of an Italian saint who protects babies, I can't recall. I do remember thinking that if she was giving this to me, things must be pretty bad.

At some point while we were in the NICU, hovering over Max, a resident passed by and greeted Dave. Turns out they'd gone to college together. He asked why we were there and we told him that Max had a stroke. "Oh, look at him, he looks great!" he said. Young and naive, he meant it—Max did look OK. We made some feeble joke about Max being the poster child of the NICU, and asked him to see if there was information, any information at all, he could get us. He promised he would, but I suspect he got scared off when he learned what we were really dealing with because we never saw him again.

We finally had to tell our families. It was hard; my parents had been so excited about the birth of their first grandchild. I did not want them feel as wrought as I did, so I tried to downplay the situation as best I could, expressing optimism I did not feel. I called my two best friends and asked them to let people know. Then I made Dave tell the supervisor that I needed to be transferred to a room that was anywhere else but in the maternity ward. Being there was torture.

Meanwhile, I started pumping milk, determined to stock up for Max when he could feed. It was good to do something for him, because looking at him in the incubator left me feeling overwhelmingly helpless. I sat in a worn, tan pleather rocker in a little room, otherwise bare except a table, a pump and a fridge. There were many other bags of milk chilling, milk of all different shades. I'd glance at the bags and wonder what was wrong with those mothers' babies, and whether they were going to be OK. I knew every parent in that NICU was going through their own kind of hell.

Eventually, I found the resident who'd first noticed Max's foot twitching and queried her mercilessly about what she'd seen, and what she thought his future held. She told me about her father, who'd had a stroke and had managed to recover his speech function. It wasn't very reassuring; what connection did my baby have with an old guy who had a stroke? I asked every medical professional I encountered whether they had ever seen a baby who'd had a stroke. All of them said no.

The truth was, nobody could give me the only answer Dave and I wanted to hear: what was going to happen to Max.