What happened to Max: Up to the moment we knew something was terribly wrong 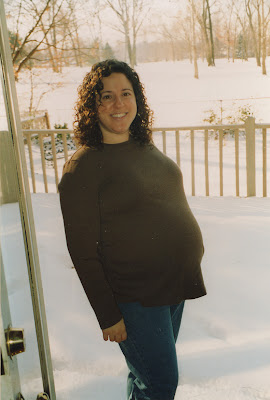 This is me standing on our deck on Dec 4, 2002, my due date. I get both happy and sad looking at this photo. Happy because I look so excited. And that's Max, beautiful Max, inside my big belly. Sad because I obviously had no idea what hell the future held.

It had been the snowiest winter in years, and Dave and I kept worrying that we wouldn't be able to make it to the hospital. That snowy day, though, I wasn't ready to go; I'd loved being pregnant.

I'd had a wonderful nine months. Some intense exhaustion during the first trimester, no nausea. After that, I was my usual high-energy self. I've never been the most thin person in the world, so having a bulging stomach didn't bug me. I loved feeling the baby moving inside me, loved hearing the galloping heartbeat at the sonograms and seeing the shadowy blob who would be my child, loved eating with abandon. In the evening, when I came home from work and Dave met me at the train, I'd raise my shirt as I walked over to the car and show him my belly, like a flasher, and we'd laugh every time. For entertainment, we'd lie in bed and watch my belly ripple.

We were so ready for Max.

I had a history only of baby love. I babysat from age 10 on, was a camp counselor in my teens, volunteered at a cancer hospital's pediatric playroom in my twenties, ogled babies on the street all the time. I assumed, with what I now see as hubris, that my baby would be born healthy. I was. We'd had no trouble conceiving. My pregnancy was uneventful.

We painted the baby's room a cheery apple green, spent way too much on fancy crib bedding, took a childbirth/newborn class in which Dave had such trouble getting the diaper on the doll I thought I would go into labor right then and there from laughing so hard. We were both hoping for a boy, even if we wouldn't admit it. We'd decided on Max, and Mia if it were a girl. We liked Max a lot more. It seemed like such a strong, feisty name. My mother, knowing that we were looking for an 'M' name in memory of my grandma Minnie, didn't like Mia and had inexplicably suggested "Mignon." My response: "And her middle name can be Filet!"

At around 5 a.m. Tuesday, December 9, I woke up feeling crampy. I dialed the doctor on call and she told us to drive to the hospital. I remember standing in the shower and thinking, Last shower before I become a mom.

At the hospital, I got pitocin to induce labor, then an epidural that didn't work, then a second one after I said some obnoxious lady-in-labor things to the anesthesiologist. But, nothing. Hours went by. I wasn't allowed to eat yet that didn't stop Dave from downing a big Subway sandwich in front of my face (some things, you never forget). Several times, I was given oxygen. Finally, I started pushing. The doctor was not my usual beloved one; I'd met him only once before. There were two nurses. We chatted and even laughed, about what, I don't recall.

Max didn't progress. Me being me, I wanted to keep pushing. Finally, around 11:00 p.m., they decided on a C-section. It wasn't an emergency or anything; it was all pretty calm.

They wheeled me into the operating room, covered my lower half with a sheet, drugged me up at some point. I felt a lot of pressure, then suddenly heard a baby's wail. "You have a boy," a doctor said (there were a few of them in there). Dave got to hold Max first. He was standing behind me, and I can vividly picture looking over my shoulder and seeing him staring so wondrously at the bundle in his arms. He was in awe, and he was in love.

Max was pink and perfect, not at all wrinkly or ET-like as newborns can be. He had amazing Apgar scores. "Even pediatricians' kids don't have Apgars like that!" a doctor joked.

The rest of the night is a blur: cuddling Max in a tiny room where they parked me while they waited for a real room to open up. Me not quite believing that, yes, an actual baby had been inside me all those months. This one. Begging for water and being told I wasn't allowed to drink, then making Dave smuggle in a cup of ice chips. Finally getting a room. Trying to breastfeed in the dark for the first time as Max cried and wouldn't latch on but kinda-sorta finally did. And then, morning.

My mother and sister came to visit at around 11. As I tried to feed Max, he stopped breathing and turned blue. Dave ran out and got a nurse. She came in and whacked Max on the back. "Mucus!" she said, by way of explanation. My mother and sister looked worried. Max seemed OK after that.

A couple hours later, as I held him, he stopped breathing again. This time they whisked him away to the NICU.

My body was healing from the C-section and I still wasn't able to walk, so Dave kept going to see Max, who was in an incubator. I forced myself to get up in the early evening. As we waited at the elevator bank to go to the NICU, there was a doctor standing there. Glasses, young, a little nerdy. He nodded at us.
"Did they use forceps during your delivery?" he suddenly asked. I'd never seen this doctor before, and thought it was a bizarre question (as it turned out, Dave had spoken with him in the NICU). I figured maybe he was looking for people for some research project or something.
"No," I said. "Why?"

"Because your baby is having seizures," he answered.

And that's the moment when I went from the happiest day of my life to the most devastating one. I couldn't have imagined how much worse things were going to get.

Part 2: The day we found out babies can have strokes