Confessions of a goldfish killer 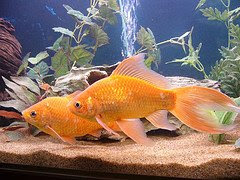 I missed the usual Monday Morning Confessional cause I wanted to share the news that I'd found about promising new research on preventing CP. The professor of chemistry I e-mailed to thank for the research wrote back to tell me that it only applies to oxygen deprivation, for those of you who were wondering.

So, being that I'm usually up to no good, I do have something to unload:

I killed our goldfish.

Yes, I did. It's amazing they even survived for several months because I kept forgetting to feed them. So did a certain husband. Named Dave. Only this time it was me who was supposed to do it, and I spaced. And one morning, they were gone. Both at once.

Another bad thing: THEY DIED NAMELESS. That's right, we never even decided what to call them. When I'd ask Sabrina for suggestions she'd say, ever so creatively, "Fish!" Max would just smile at them and say "ISH!" And so, Fish or ISH! they were.

Amazingly, the kids haven't noticed they are gone for good. Dave just said something about taking the fish to the pet store for a checkup, and that was that.

The worst fish death I ever witnessed (though it was manslaughter, not murder) was this. I used to work with a sweet but clueless woman I'll call M. She was going on vacation for a week, and she wanted the janitor at the office to feed her fish. On the day M asked him, she presented the janitor with a canister of fish food and a bag of Pepperidge Farm goldfish to help him remember to feed the real fish. He didn't speak English very well, and obviously something got lost in the translation cause guess which food he gave the fish?

Anyway, I am obviously trying to distract you from the issue at hand which is me, the fish killer. I don't think either Dave or I are quite ready to handle the responsibility of fish. Two kids, sure. Two jobs, no problem. One mortgage, fine. Two fish, not so much.