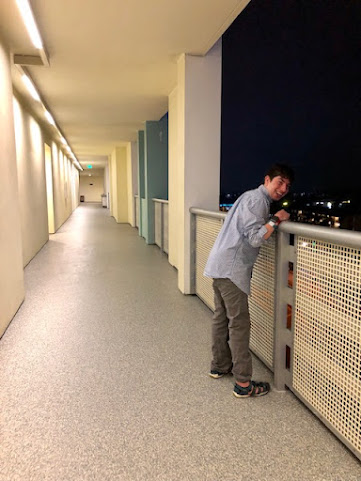 Winter break already feels like it was eons away, mainly because my children were doing virtual school on and off these past few weeks. I didn't have any time to put my one New Year's resolution into action, which was: Be like Max. Literally, be.

We went to Florida for winter break. I was somewhat mostly extremely freaked about being in the airport and demanded that everyone double mask and wear face shields, which pretty much made everyone hate me. 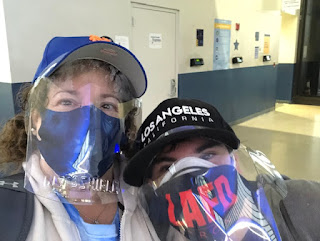 We made it to Florida by way of Chicago, because our direct flight was one of hundreds cancelled that day. Whatever—I was just thrilled to be there or, really, anywhere but home. Max was thrilled to be somewhere warm. I mean, it wasn't Los Angeles but for once he did not remind us every five minutes that he needed to move there (although he did repeatedly say, "New Jersey is not healthy for me!!!" as an excuse for trying to stay longer).

Max was thrilled to see palm trees. He loved visiting the local fire station and going out for ice-cream every night. But his absolute favorite activity was standing on the landing near our room and looking out at the traffic and people walking around below. He did it during the day. He did it at night. He got to be such a permanent fixture there that the housekeeping crew greeted him by name.
Years ago, I surely would have felt anxious about the fact that Max preferred to stand around and do nothing, rather than having fun in the pool (he went in once), going to the beach (not his thing) or even to the Tampa zoo (he threw a fit and refused to go in). But now, I not only accepted that this is what he preferred to do, I admired it.
Max has the ability to get lost in thought. Granted, he also has the ability to get lost in his iPad for hours on end. But being able to observe, ponder, take everything in and just be is something that's hard for me to do and, I'd say, a lot of adults. If I'm not multi-tasking, I'm doing it in my head. Yoga's not my thing. I could try one of those meditation apps, but somehow I never get around to it.

My restless mind, as yogis would call it, is in part fueled by having a shit-ton to do and because always doing helps me avoid thinking about unpleasant stuff I don't want to think about (like, Covid). Also, it makes me feel useful. I caught this Insta post from Glennon Doyle over vacation and thought YES. This. 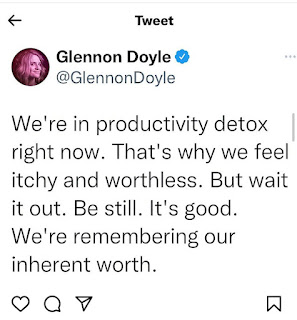 On vacation, I did get to catch up with myself for a little bit. But coming back from vacation is the worst time to put your resolution to be more pensive into practice.
And so here I am, headed into a new week. I'm aiming low—I've scheduled 15 minutes on my calendar. for tomorrow, Tuesday. It's a meeting with myself I've titled "DON'T DO ANYTHING." Maybe I'll take a walk or actually try a meditation. Maybe I'll just stand on our porch or deck and stare.