The thing about the red nail polish 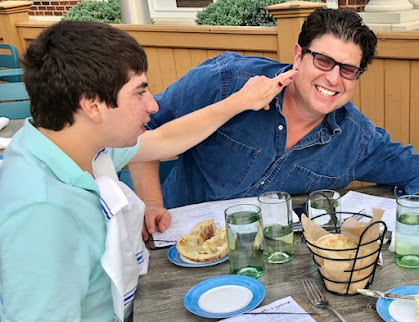 Max came home from a morning out with Dave the other day. They'd gone to get pedicures; let's just say their toes needed TLC. Max had his nails done, too. Red, his favorite color.
"Wow, wow, wow, Max!" I said.

Max beamed.
I wasn't even aware that boys were into wearing nail polish these days until Ben wanted some a year or so ago and Sabrina informed me that it was a thing. I do not have nail polish in my genes; my mom rarely polished her nails growing up. The first time (and I think maybe the only one) she ever got a manicure was for my wedding, when I insisted. Me, I love a good pedi, but I do way too many chores and way too much typing to justify a manicure since my nails inevitably chip within a couple of days.
Max held out both hands for me to admire his nails.
When Max was little, I was acutely aware of people staring at him. When we were out, I'd watch people watching him and it would eat me up alive. Because I thought it was rude, because I yearned for others to accept him for who he was and because I was still coming to terms with having a child who was seemingly so different from my friends' children.

As Max got older, I more or less quit caring about what people thought. I also stopped seeing him as "different" and accepted him for who he was. Max didn't care: He wasn't aware of the looks and besides, he didn't think anything was wrong with himself. I felt exactly the same. If people could not see the whole of who he was—a bright-eyed, super-sunny, charming, good-humored, overall adorable boy with his own way of walking and talking—well, that was their problem, and their loss.
I still find it's rude when people gawk, but it no longer pains me. The red nails made me think of all this. I would have worried, when Max was younger, that the nails would make him stand out more. Years ago when he was in his everything-purple phase, I spotted purple Crocs at Target and decided not to get them because I so badly wanted him to fit in. It still haunts me, to this day.

The other morning, though, all I could see was a young man standing in front of me with the biggest smile on his face and gloriously red nails.
"They look amazing," I told him. And I meant it.
Ellen Seidman at 9:29 AM