The people who see our children for who they are 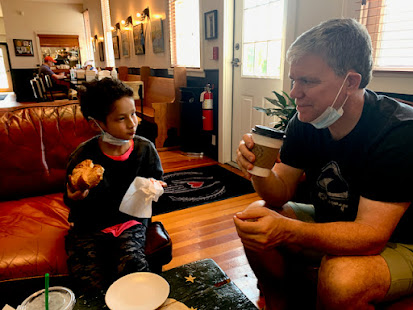 This is a guest post by Jane Kim, a writer and mom to a 9-year-old with autism. She works in the field of immigration, and lives with her family in the Philadelphia suburbs. Find Jane on Twitter@JKimRites.

“What’s missing?”   The speech therapist looked at my son, T, expectantly. She had placed a few household items in front of him, gave him time to look at them, blindfolded him, and then removed two of the items and his blindfold. This activity was meant to build vocabulary and boost memory. For much of T’s early life, this was a typical afternoon. He was diagnosed with Autism Spectrum Disorder (ASD) when he was around three years old, and a cadre of therapists were an everyday part of our lives.

As a parent, when your child has ASD, you are trained to notice what’s amiss. He’s not imitating others enough. He’s not participating in symbolic play. He should be more engaged with children at preschool/in the neighborhood/on playdates.

This information is helpful to therapists and clinicians who structure programs and recommendations based on your child’s current abilities. However, it’s not helpful when it becomes your primary focus. As T missed milestones or met them shakily, I grew hyper-vigilant. As he was potty training, I noticed when his pants were wet more than when they were not. When he was learning to get dressed, I promptly commented his shorts were on backwards. Regretfully, I often told him before he could notice it himself, depriving him of the opportunity to learn and gaining self-reliance.

It was a stressful few years, and downtime was nonexistent. When you’re preoccupied with what’s missing in someone else’s life, ironically, you fail to notice what’s missing in your own. My life had lost all balance and was overrun by to-do lists and anxiety. As T grew older, things got a bit easier. He started attending kindergarten full-time, developed a love of books and music and was riding his scooter at dangerous speeds around the neighborhood. I started sporadically seeing friends again and joined a tennis league. It was the first time in a while I had started feeling like myself again, after my marriage ended.

When I met Mark, I was heading out of the weeds, but still primarily focused on T’s IEP goals and how to integrate him more socially into the classroom. At their first meeting, T dragged him upstairs by the hand to show him his bedroom within seconds of meeting him. When they didn’t come down for 5 minutes, I knew it was a good sign.

At dinner, I jokingly apologized for T holding him hostage in his room. Mark was unfazed. Instead, he relayed what they chatted about — his fire truck, how dark his room could get, the ceiling fan - and how much T seemed to like his room. I was surprised, waiting for Mark to describe the interaction as unusual, unexpected or something along those lines, but that discussion never surfaced, and we easily moved onto other topics.

As Mark and I grew closer, so did the two of them. Mark accepted T as is, which laid the groundwork for their relationship to flourish. During T’s fascination with All Things Bear, Mark listened to endless facts about bears, had countless conversations and even surprised T and dressed up as a non-hibernating bear last winter.

He happily took turns pretending to be different characters in Fireman Sam, T’s favorite TV show. When T discovered his inner cyclist, Mark was always ready to accompany him on a ride. 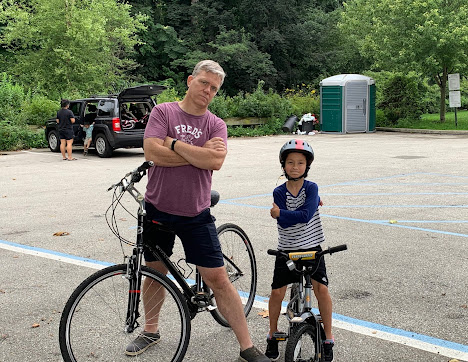 Watching Mark immerse himself into T’s world with interest, enthusiasm and no hidden agenda was magical. In turn, T became more communicative and flexible and open to learning new things such as pumping a bike tire and Snap Circuits. Within a few months, T nicknamed him “Marky.” Like clockwork at around 5:30 every evening, he’d ask, “When is Marky coming for dinner?”

When someone accepts your child as he is, it can shift your focus from what is missing or what needs to be changed to what’s right in front of you. Mark showed me that people outside of my immediate family could see and accept T for who he is, with all his strengths, challenges and quirks. It’s an important reminder that when people are seen and respected, it makes it that much easier for their best selves to emerge.

One day, I was listening to an episode of The Tim Ferriss Show and his guest, Greg McKeown, said the following: “If you focus on what you have, you gain what you lack. And if you focus on what you lack, you lose what you have.” This deeply resonated with me. As a parent of a child with autism, everyday challenges are often a way of life. However, those challenges become less daunting and manageable if you choose to see — and celebrate — what’s right in front of you.

This post is dedicated to MM, who has shown me the importance of seeing what’s in front of you, above all else.