The next phase of his life 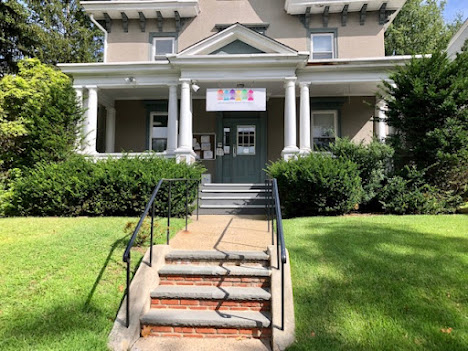 I happened to have an appointment for Max to meet with a local recreational program for adults with disabilities the same week that my Facebook and Instagram feeds were filled with photos of friends sending their teens off to college. The fact that Max wasn't starting college had been on my mind. I have more or less made peace with that, and I am beyond proud of his accomplishments, but those big life transitions still ping my heart.  As Dave, Max and I drove over to the office of the program, I was acutely aware of how different Max's path was.

The nonprofit we were visiting also runs a residence and over the years, Dave and I have seen groups of adults from the home in restaurants, in parks and walking around. I'd always wondered if one day Max might be a part of a group like that. Now he's 18 and although it's not yet clear what his living situation will be, it was time for him to get started with the organization. Max needs more activities in his life he can do without us, and friends other than his family.

The office looked like a home. "Advancing independence for adults with disabilities" read the sign hanging from the porch. From the second we stepped foot on the porch, it was clear who was in charge.

"I don't like September!" Max announced, starting at the monthly event calendars pinned to a bulletin board. "I like August! August is hot!"

Max and I do not see eye-to-eye on the heat thing, but I acknowledged that yes, we knew he preferred the heat and I pointed out that September weather can be hot, too. Soon the intake coordinator, Frank, invited us inside and we sat down in his office with Nicole, who runs the Social Wellness and Expressive Arts division. I'd later realize that I'd connected with her the year before, when my Girl Scout troop had sent residents greetings cards in the early stages of the pandemic when they couldn't receive visitors.

Frank had a list of questions for Max, starting with where he lived.

"This is NOT my home!" Max announced. He looked at me, his sometimes spokesperson.

I explained that Max considers his house our "vacation" home because his true home is Los Angeles, or at least he'd like it to be.

"OK, why do you love Los Angeles so much?" asked Frank.

Max listed Disneyland, the weather, the fire station he is fond of, the fact that Dave's friends Jeff, Jon and Ben live there and Max considers them his friends.

"They also have earthquakes in Los Angeles!" Frank noted.

Frank asked Max what sort of activities he enjoys. Max reeled them off: taking walks to the fire department, going out for steak and salmon, bowling, movies, traveling. I know just how much Max appreciates exploring the world, but as we sat there I thought of how much progress he'd made since the days when just going to a restaurant terrified him.

"Ask him what movie is coming out," I said.

"What movie is coming out?" Frank asked.

"Sing 2!" said Max, who often knows such things ahead of any of us.

Frank wanted to know about Max's level of independence. We spoke about him ambling around town on his own and using his Apple watch to stay in touch. He asked about chores Max does.

I looked at Dave. "Well, he doesn't really do laundry," I said. Max has hardly ever pitched in with it at home, and we've never enforced it.

Turned out they were referring to that one time  at the start of summer when he, Max and Sabrina took a trip to Los Angeles and Max put clothes into the washing machine. Dave was so awed by this rare show of laundry doing that he'd taken a photo, which he was now searching for on his phone.

"OK, Max does laundry when he's in Los Angeles," I agreed.

"Parents argue!" Frank said out loud, pretending to take notes on his pad, and we all cracked up.

We talked about Max's cooking—he specializes in making scrambled eggs for breakfast, with someone standing nearby. We noted that he is a good brother to Ben, often cautioning him to not hurt himself or to go to bed. Max talked about how much he'd enjoyed camp. He spoke more about Los Angeles. Frank asked about friends; Max pointed to Dave, his BFF.

"Max is one of the most social people you'll ever meet," I said. "Right, Max? You're so friendly!"

"They call him the mayor of his school," I added.

"That's interesting, because there's a person in our program we call the mayor," said Frank. "Maybe he's going to be displaced!"

Max did the majority of the talking that day, in total command of the conversation. That, too, made me aware of just how far our boy had come, despite the grim odds and naysayers. The neurologist who said we could sign a Do Not Resuscitate for our newborn. The neonatologist who informed me that Max's future looked "ominous." The therapists, teachers and camp staffers who believed in Max when others turned him away from programs or couldn't see his abilities. The inchstones, the milestones and everything in between.

Maybe he wasn't going to college but once again, Max was acing life.

When we were done with the application, Max grinned his giant Max grin and asked, "Can I come back on Monday?"

Things were still up in the air with programming because of the pandemic. Clearly, though, Max was ready for a new adventure. Me and Dave, too.