Students build a wheelchair stroller for a dad with disabilities: amazing but... 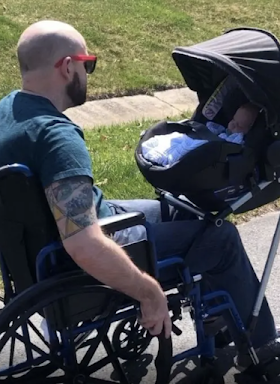 I've been thinking about this ever since I read about an article on GMA about a group of high school students who created a wheelchair attachment so a new dad could take his baby for a walk.

Jeremy King, 37, of Germantown, Maryland, has had some physical challenges—including balance—ever since he underwent brain surgery for a tumor three years ago. He and his wife, Chelsea King, were expecting a baby last summer and realized there were few options that would enable him to stroll around with his tot and do other activities. Chelsea turned to a local high school and students in the course Making for Social Good.

The students came up with an attachment—the WheeStroll—that would connect an infant seat to a wheelchair, checking in with the couple for feedback and testing it with cinder blocks to ensure it was safe. They printed some of the parts on a 3D printer, and shared the instructions so others could build the attachment, too.

This was, obviously, a game-changer for this dad and his family. News outlets were thrilled to share a story with such a happy ending. But it was mind-boggling to me that this is a struggle a couple faced in 2021. While there are other bespoke creations and designs out there for connecting strollers to wheelchairs, it seems like they have not yet been produced.

I mean: Two humans took jaunts into space in recent weeks, and our very own planet lacks ways for parents with disabilities to take their babies for walks?!

I have often felt, in the 18 years that I've been raising a child with disabilities, seriously grateful for advances that have enabled him, everything from communication apps to adaptive clothes and sneakers. Still, the truth is that advances for people with disabilities lag way behind those for the general population. And I can't help but wonder how much better and easier life would be for my boy and other people with disabilities if more people and companies put their minds to this.

The field of accessible design—known as universal design—is growing. Still, it's common for friends and families of people with disabilities to be the ones who make innovations happen, like the dad who recently created a safety feature to stop power wheelchairs from tipping over. Sometimes, design labs at schools or social-good programs or 3D innovators lend their expertise. But where are the big companies putting their collective brains to this? The Elon Musks? Accessibility shouldn't be a side project.

When I became a mom for the third time, I was floored by the number of baby products that had sprung up in the 11 years since I'd last had a kid, especially the extreme number of stroller options. Parents who use wheelchairs don't even have have one widely available choice for strollers.

[Gets off the wheelchair-accessible soapbox.]