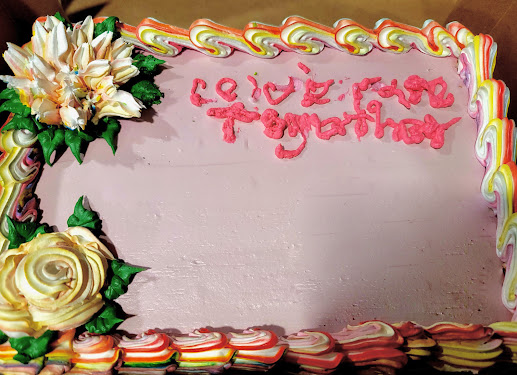 The woman standing at the Shop 'n Save bakery counter needed a cake for a celebration. A friendly face greeted her: Andrew, a young man with disabilities. He informed her that he couldn't write on it, she relayed in a Facebook post that went viral, "because he was nervous that customers have not been so nice to him and that it would be messy."

My heart ached when I read that. Earlier in the day, I had reposted a plea for job opps from the principal of Max's school on my Facebook page and a few local ones. Max is in a program through which he's supposed to get work experience. It got suspended during the pandemic and Max was home for the year, anyway, until he got vaccinated. He managed to get some skills practice at home thanks to the ingenuity of the program director, but he and his fellow students have been missing out. Max was really eager to try out jobs.

During Max's recent IEP (Individualized Education Program) meeting, I asked about the job situation for the next year and it became clear there was a dearth of them. I wasn't surprised given that the pandemic has shut down a lot of small businesses, but I was concerned. I emailed the principal and mentioned that while I had every faith the school was doing what it could to secure jobs, this would be a good time to post about it on their Facebook page, send out an email and ask parents and the community to spread the word.

It was sobering to consider Max's future in the work world. People with disabilities (PWD) have historically had fewer work prospects than people without disabilities, and Covid has disproportionately affected them. Last year marked the lowest unemployment rate for PWD in seven years, reports HR Dive.

My spirits lifted as I continued reading the post. The woman told Andrew that he most certainly could write on the cake. "It will be perfect!" she reassured him. "I gave him a little boost by telling him that he can do ANYTHING he puts his mind and heart into."

Andrew headed to the cake decorating table at that supermarket located in nowhere else but Fairchance, Pennsylvania. He turned around and asked Cheryl what she wanted the cake to say.

"Celebrate together," she told him.

She said that was OK.

Are you feeling all the feels? I am. Because encouraging people like this woman are not the norm, as I know all too well from raising my amazing young man with disabilities.

If you are not the parent of a child with disabilities or don't have a family member with disabilities, perhaps you've gotten misty-eyed because it is such a feel-good story. But the awwww factor is not the point. The challenges that PWD face in the workforce is.

This story would not be a thing if people with disabilities were a typical part of the workforce.

It's pretty basic: If more people with disabilities had jobs, then PWD doing their jobs wouldn't be newsworthy.

While some people with disabilities have fewer job options because of their physical or cognitive realities, mostly they are limited by closed-mindedness, stereotypes and prejudice.

Andrew finished icing on the message, boxed the cake and brought it over to the customer.

This story wouldn't be a big deal if people were more open-minded about those with disabilities.

The vast majority of people do not get that people with disabilities have plenty of abilities. Some can do jobs every bit as well as people without disabilities, it not better. Some, like my son, may take a little more time to accomplish tasks and require support and more patience and understanding. Some may not do things in the typical way, and the results may not always be up to perfection norms. But does perfection that conforms to societal standards always need to be the ultimate goal?

Maybe you can be more patient and encouraging when you encounter a PWD in a store, at a business or wherever. Maybe you could let the manager or company know that you applaud them for hiring PWD. Cheryl planned tell the manager about her great customer service experience. I did the same last year when a resort we were at had a young man with cerebral palsy checking in people in at the pool.

If you own a business, company or nonprofit, consider affirmative action—it applies to people of all abilities, not just gender, race and sexuality. For starters, you could reach out to local schools for students with disabilities, programs and nonprofits that promote the employment of people with disabilities. You could kick off a discussion on your local business Facebook page to find out what other businesses have been doing and at the very least, get people thinking. You could make a difference in your community, and to people like my son and Andrew.

"I don't just like it, I LOVE it, Andrew," the woman replied to Andrew. "It's ABSOLUTELY perfect. See, just when you doubted yourself, you did it, right?!"