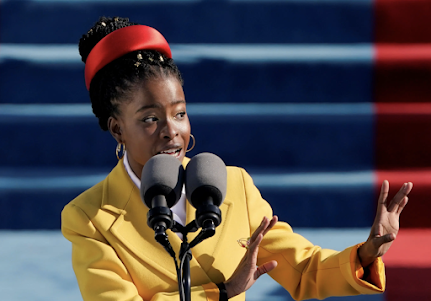 Yesterday's inauguration ceremony was beautiful, meaningful and cathartic. It gave me hope I haven't felt in forever. One of the most memorable parts was 22-year-old poet Amanda Gorman reading her poem "The Hill We Climb." Her words were powerful; she was amazingly poised and eloquent. Later in the day, I found out that she had grown up with speech and auditory processing issues when a friend shared a piece from Understood. Then I read up on her more.

As a kid, Amanda had trouble articulating certain sounds. "My challenges were always, just for me, something that was reality," she said. "But I knew I had strengths, too, with words and writing." She told NPR that the letter "r" was especially tough for her, and she learned to sidestep certain phrases. "I'd want to say 'Girls can change the world' but I cannot say so many letters in that statement, so I'd say things like 'Young women can shape the globe.'"

She worked hard to perfect her sounds and pronunciation. "I don't look at my disability as a weakness," she told the L.A. Times. "It's made me the performer that I am and the storyteller that I strive to be." In 2014, she was named the Los Angeles Youth Poet Laureate. In 2015, she published her first book of poetry, The One For Whom Food Is Not Enough. Yesterday, she made history as the youngest known inaugural poet un U.S. history.

I watched Amanda read the poem again last night. I can't say I was astounded—as the mom of a very determined person with disabilities, I've seen how much can be overcome with sheer will. I know full well the slippery slope of praising someone with disabilities who's just living their life and doing their best. Still, I was heartened to know she was a member of my boy's club. And I felt glad that she's been vocal about her struggles, in the name of helping people see the ability in disability.

For there is always light,

if only we're brave enough to see it

if only we're brave enough to see it