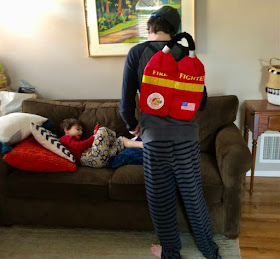 The other day, I came downstairs carrying a little backpack I was planning to give to a neighbor's kid, since Ben had grown out of it. It was red, imprinted with the words "fire fighter" and had patches and reflective trim. I dropped it on a chair in the living room as I grabbed my coat. Max walked in, took one look and said "Mine!"

"No!" he said. He made me put it on him and it fit, so he walked around with it for a bit then headed over to Ben, who was chilling on the sofa.

"Firefighter?" Max asked. He wanted to know if Ben wanted to be a firefighter when he grew up, just like Max wants to be.

I wondered if he was going to start wearing the backpack. Not that we are going much of anywhere, but an 18-year-old wearing a child's backpack would draw attention on walks around town.

But wasn't I past caring about what people thought of Max? If it made him happy, did it even matter?

But then, wasn't he 18 and seemingly past the whole dress-up thing? Wasn't it my job to help him fit in as much as possible?

But then: It makes him happy. He is who is he is. He is old enough to make his own decisions.

Max stood there, waiting for Ben to answer.

"Ben, do you want to be a police officer?" I asked.

"How about a doctor?" I asked.

And with that, he grinned and he said, "I want to be Max."