I want to walk alone, he said 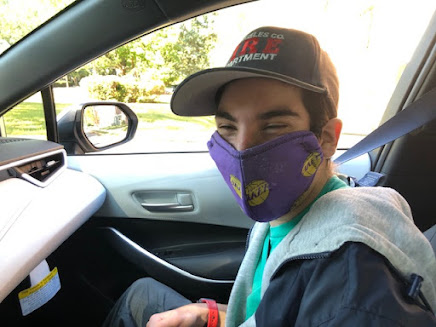 Max and I were doing one of our joy rides around the neighborhood Saturday morning, going nowhere just to get out of the house. All of a sudden he said, "Firehouse." I assumed, as usual, that he wanted to do a drive-by.

"You want us to walk there?" I asked. It was a gorgeous fall day, and walking to the fire station seemed like a good idea. It's about half a mile from our home, and takes about twenty minutes or so.

"You want to walk there by yourself?" I asked.

Walking to the fire department from our house and back involves crossing several streets, including a really large intersection. Max now takes regular walks around our neighborhood, but he's never maneuvered that intersection.

My mind was whirling. Max has matured. He knows his way around, and has a good sense of direction. He has an Apple watch, and he calls us all the time. We used to be able to track him, except it hasn't been working lately. Also: that intersection. I was also a little worried about him falling; the sidewalk is uneven in one spot on his route home. This summer, I happened to see him fall when he was out for a walk, and it unnerved me.

"Let's drive over to the fire station and see what's up," I said. But by the time we got there, we'd decided that he was going to walk home alone. So first I did a loop around, driving the route Max would walk home.

"The sidewalk over there is bumpy, and you need to be careful when you walk so you don't fall," I said as we drove down the block leading away from the fire station.

Max said, "Other side" and pointed to the other side of the street. I'd thought that avoiding crossing yet another street would be good, but Max was right—better to do that than fall.

We got to the scary intersection.

"OK, here, you have to remember to look both ways," I said. "Like this," and I modeled doing it.

One of the fire trucks was sitting outside the station when we got there, and two firefighters were hanging outside. "Hey, Max!" they greeted us as we pulled up. Most of the guys know Max, as we used to spend quite a lot of time there. He still aspires to be a firefighter, albeit one who lives in Los Angeles, his dream destination.

We got out of the car. I caught up with one of the guys as Max walked around, checked out the truck and chatted with the other guy.

"Max wants to walk home alone today," I said. The firefighter gave me a look, as in, "Really?!"

And that look was all it took to convince me that Max needed to do this. If anybody should be encouraging Max and letting him take risks within reason, it's me and Dave. There are plenty of people in his life who will question his abilities and independence, including people who know and adore him. And while I may have my mom phobias and fears, I have to let Max loose.

"Yes, he's mature enough to do it," I said. "Can you believe he's going to be eighteen in a couple of months?!"

He could not believe it.

Max came over, and we discussed walking home again.

"You need to call me or Daddy if you need anything!" I said.

I zipped up his jacket.

"Yes, but I don't want it to fall off," I mentioned, then realized I had to let him go.

Max walked back over the fire truck.

"See ya!" Max said, and the firefighter I'd been talking with smiled.

I walked to the car, then turned back to look at Max one more time.

He slapped his leg and cocked his head to one side, his version of the eye roll.

I drove off looking at him in the rearview mirror. Back at home, I cleaned up after breakfast and tried not to call Max. Dave came downstairs from his shower.

"He's walking home from the fire station," I said.

We tried calling him, but he didn't pick up. We tried again, no response.

It had been 25 minutes. I jumped in the car. The fire station is on a one-way street, so I had to loop around. The doors were closed. I drove down the street. There was a guy sitting on a bench, alone, and I wondered if he was a perv for no good reason at all. I got to the intersection, which looked bigger than ever. I drove the whole route home, feeling increasingly panicky. No Max.

I started driving back to the fire station again and called Dave, my heart pounding.

Max was waiting for me on the porch when I pulled into our driveway. I flew out the car door.

"MAXXXXXXXXXX!" I said. "How was your walk?"

And then he asked: