Desperation is the motherhood of virtual school inventions 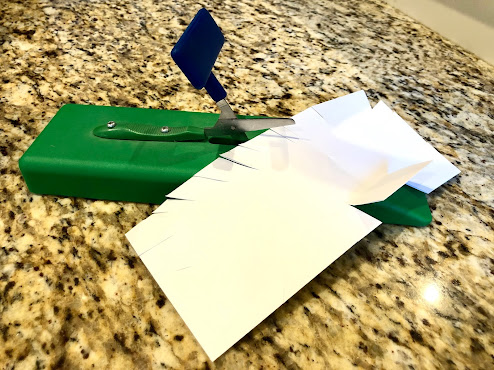 Recently, our adventures in virtual school and virtual therapy hit a new level of what-fresh-hell-is-this. It started in the morning, when I realized that Max was not going to be able to do the data entry spreadsheet his school had sent on his iPad, although someone who is his father who shall remain nameless had said it would work. Unfortunately that someone was away on business and I could not open it, so I grabbed my computer instead.

Max is pretty good at typing and he's done this sort of thing at school, so I had hopes. He filled out one line and announced, "I don't like this!"

I was in the middle of my workday, and did not have much time to try to persuade him. I also wasn't sure how I could—I mean, data entry: not incredibly exciting. Although I have to say, doing some mindless task that would take me away from the pandemics and politics suddenly sounded pretty good.

"It's a good thing for you to learn," I offered.

Max looked at me.

Max looked at me.

And then, in a moment of desperation, inspiration struck. I scribbled on the form, paying tribute to Max's dream of moving  to L.A.: 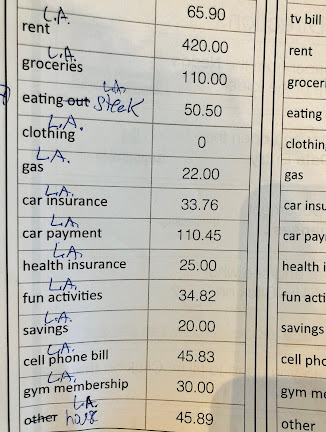 And Max grinned and went to it and produced this bit of data-entry gorgeousness: 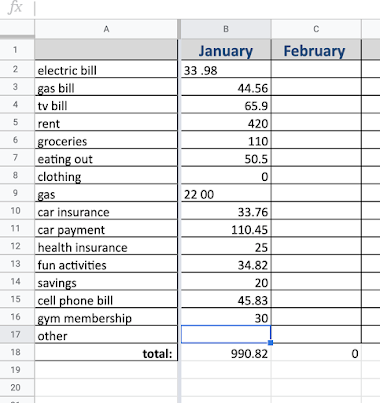 One small step for virtual schooling, one less possibility of me losing my mind. At least for the time-being, because that afternoon brought a whole other struggle.

Our sitter is around on the days when I am working, and we are lucky to have her. She's usually there to help Max with moving papers around or iPad issues. But sometimes it's me or Dave and as any WFH parent around the country will attest, that juggle is h-a-r-d. Not to mention the fact that despite 17 years of parenting Max, I am still not a qualified therapist, as became obvious.

We had picked up envelopes and adhesive labels from Max's school for him to practice working on. I'd had my doubts, and had noted that he would have trouble manipulating them. Someone there had suggested we unpeel the labels and put them on the edge of the table for him to grab. So that's what happened at the start of his OT session.

It was an exercise in utter and total frustration. He was able to grab the label on the table, but getting it onto the envelope let alone in a corner of the envelope was hard. The OT watched through the angled-down screen of Max's iPad as he tried, at her suggestion, to do it with the envelope placed vertically. We encouraged him to use his right hand, the one he tends to forget he has. (His left hand functions much better and he prefers to use that one alone unless prompted eleventy billion times "Max! Use your other hand!"). He did but still, the labels kept sticking to his fingers. We finally all agreed this was not working out, and Max's career as a label sticker-on-er came to a screeching stop. We reassured him it was a very hard thing to do.

But Max wasn't done. No, not Max. He had something to prove. He grabbed thehis adaptive scissors sitting on the table and he announced, "I can cut!"

Oh, my heart. I was pained—Max felt the need to prove he had abilities because he had not done well with the labels. I let the school know, as did his OT. And within a week, Team Max had come up iwth a plan for tasks that he could do (more on that another time).

"Yes, you can cut," I said. And we grabbed one of the envelopes,  I helped him feed it it into the scissors, he chopped it up and it was supremely satisfying and metaphorical all at once.