I'll take any bit of normal we can get 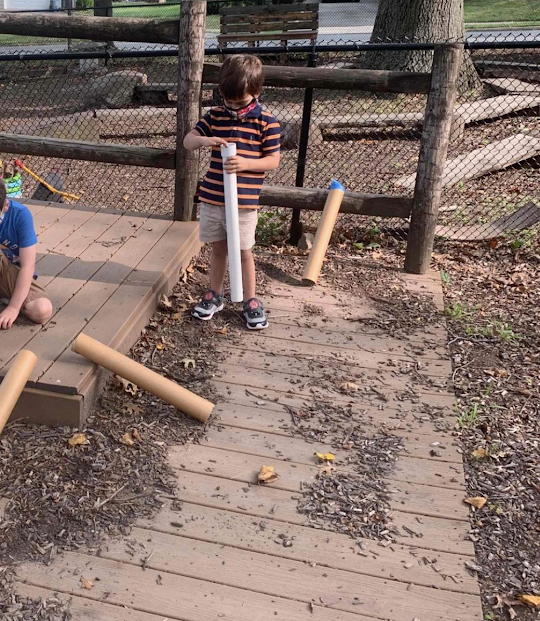 Normal, as I've learned from raising Max, is an overrated word. Ditto for "typical." We all know our kids are better than that! Unique, that's what they are, with their own special capabilities, charms and ways of doing stuff. And yet, normal life is what I've been aching for, and I got a burst of it when I picked up Ben at preschool yesterday for the first time since the pandemic began.

He's the only one of our children actually going to school, although he's doing the outdoor-only program. It had seemed fine, other than the fact that we learned on the weekend the plan was to take all the kids indoors as a group for potty trips. A few emails to the director later (I wasn't the only parent concerned) and I found out they'd made plans to keep kids outside who don't need a bathroom break.

Nothing felt normal about Max or Sabrina's first day since they didn't go back to school, other than the requisite photos on our front porch. We did the same with Ben. 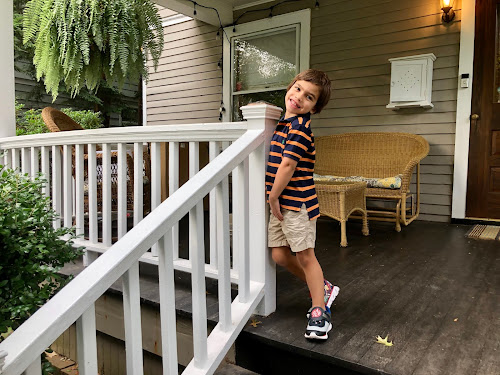 Laying out a cute first-day-of-school outfit the night before: normal.

Figuring out which mask he should wear: a new normal that still doesn't feel normal.

The hustle to get him to eat breakfast: normal.

Having to pack a snack and plastic bottle of water in a brown paper bag because kids aren't allowed to bring backpacks or water bottles: not normal.

The fact that we didn't notice Ben was wearing his sneakers on the wrong foot till right before we left: normal!

We were all in good cheer on the 10-minute drive to the school. I filled out the health questionnaire on the app. We pulled into the familiar driveway, as we've done hundreds of times.

Everything looked the same.

Teachers were all in masks; one leaned into the car to take Ben's temperature. All the kids were in masks, their bright eyes peering out , some excitedly and some nervously. I had mine on when I got out of the car to unbuckle him, and we did a mask-to-mask kiss.

Not. Normal. So disconcertingly NOT NORMAL.

I hadn't been back to the school since it had abruptly shut down that second week in March. I was truly grateful Ben would get to hang with friends. But I kept thinking, sadly, look how much our lives have changed.

I don't have a lot of time to wallow these days. I don't want to wallow, because it's too easy to get stuck in that muck. Every once in a while, though, it hits me. What kind of normal is this? When will the old normal return? Will it ever feel like the old normal again?

And so, I welcome anything and everything that's from our old normal. Hanging at Dave's parents house. Floortime with Ben. Early morning chats with the guy who cuts our lawn. Ordering in a pizza on Sunday night.

I went back home after drop-off and worked for a few hours, then Dave and I drove to pick Ben up. And it was absolutely amazing.

Ben ran happily to me, as he has since the day I first picked him up there.

He was clutching artwork he'd made.

"Mommy, a boy had gummy bear juice! I want some!" he announced.

Which technically wasn't a normal statement but listening to his chatter about snack-time and the friends in his class and playing was so normal. And he gnawed on the baby carrots I'd brought, because I know he's hungry after school and that is my normal sneaky way to get veggies into him before lunch. And we got home and walked hand-in-hand to our front door.

And it was all this mom could hope for these days: Just a little bit of normal.