File under: We are onto you, buddy! 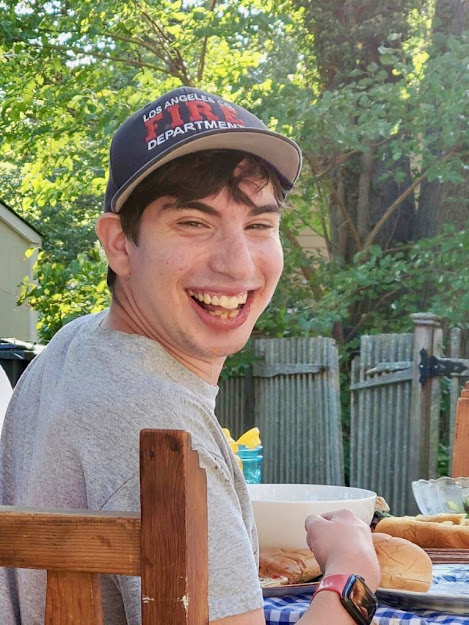 For years, we've known that Max acts more independently when he is not around us, often in terms of eating. He is all too glad to let Dave lend him a hand. Until recently, we thought we had to cut up food for him. This, evidently, is not entirely true.

Sunday, we had a barbecue at my sister-in-law's. Dave and I had to head home—the boys wanted to sleep over, so we needed clothes for them and we also wanted to take Sabrina out for a special dinner since we rarely have alone time with her. We rarely leave Max alone, even with family, but it was just for a couple of hours and we figured we'd be back before the dinner BBQ. Except dinner started early, I found out.

Text to sister-in-law: What did he have for dinner? Who cut up his food?

Emily: He was amazing he fed himself a burger. He did really well. He cut it up himself with his fork.

Me to Dave: "MAX ATE BY HIMSELF AND HE CUT UP HIS BURGER WITH A FORK!"

I tried to picture it, and I could see it—Max clenching the fork and carving pieces out of the burger. He holds onto utensils tightly because he doesn't have the dexterity to hold them with less tension, and that force would have come in handy for cutting.

Text to sister-in-law: He's never cut up anything for himself before. That is incredible.

Emily: Wow he was like a pro. He also roasted up his own marshmallows.

Me to Dave: "HE ROASTED HIS OWN MARSHMALLOWS!!!"

We've seen Max holding his own stick over a firepit before—but the fact that he was doing it without us was wondrous. And never in the history of Max had he cut up his food, spear it and eat it. We've always chopped, sliced and diced for him out of concern that Max, whose chewing is impacted by his cerebral palsy, could choke on a too-large piece. But Max has gotten pretty adept at knowing how much is too much—I've seen it when he's eating.

It's easier for Max to let us keep on helping him. I get that. Long ago, we figured out that he doesn't often let on when he's achieved a skill—like that day I dropped by his classroom when he was a kid and was astounded to see him using a spoon, which he hadn't been doing at him. And now, we once again have proof of his capabilities, which can and will be used against him! Er, to help him!

Cutting up his food was yet another milestone in Max's evolution. It was a reminder that we absolutely need to force ourselves to step back and let Max help himself with eating. And it was just beyond heartening to know that this is yet another thing Max can DIY. 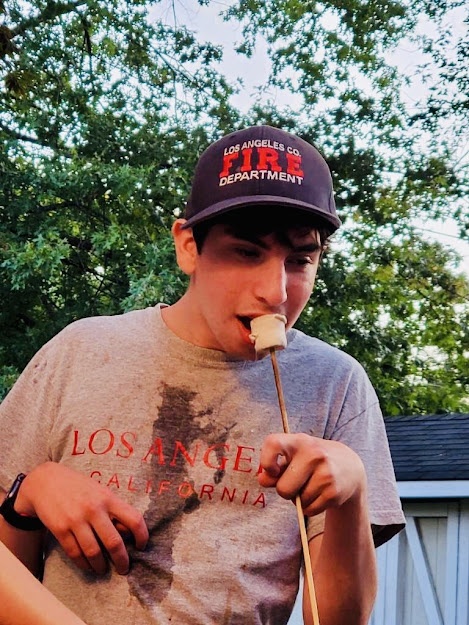