All those years of therapy and it's come to this 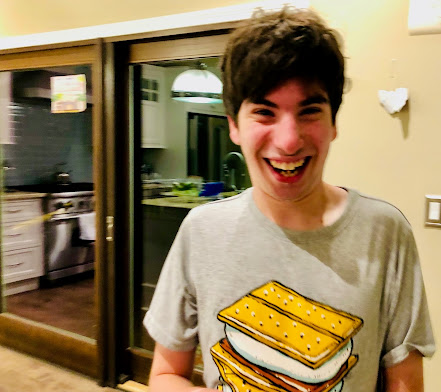 I started looking into therapy before Max had left the NICU. "Get him as much therapy as you can," the seasoned pediatric neurologist had told us, and we did—it was all we had. I reached out to an Early Intervention supervisor, and Max started getting physical therapy right around when he turned a month old. By the time he was one, he had 10 to 12 sessions of therapy a week including private PT, OT, speech, vision therapy, aquatic therapy, craniosacral therapy and, eventually, hippotherapy (horseback riding) and hyperbaric oxygen treatment, too.

There was nothing we weren't willing to try, as long as it wouldn't pose any harm.

Max was a pretty cheerful kid who liked hanging out with people and he went along with the manipulation of his fingers, hands, limbs and torso just fine. Horseback riding, he did not love but eventually he got into it. Therapy became second nature to him, a normal part of his routine.

We were lucky to find amazing therapists, though good and reliable speech pros were the hardest to come by. We were also lucky to find ones willing to come to our house, because I was working full-time. For several years, on Thursday nights, Dave drove Max 40 minutes away to see the most amazing physical therapist who would do things like balance Max on his outstretched hands.

Time passed by. The days were slow, the years were fast. Some therapists stayed on for a long time. Some came and went, and each time I scrambled to find someone as good as before. When Max was 14 an OT told me she no longer had anything she could offer him, which was a shocker. I'd heard it before: I once had a standoff with a school speech therapist who wanted to quit working on Max's articulation and focus only on app-enabled communication, because she didn't think his speech would progress. It has. Doctors always tell you that therapy is most important when children are young and in the physical and cognitive formative stages, but I am here to say that our children never run out of potential for progress and acing new things, big or small. (See: Max shows us how to swim.)

Max's last OT moved away early in 2020, and finding a replacement has gotten paused by the pandemic. It's proven impossible to find a physical therapist to come to our home, and so he has only had that at school for the last several years. Our speech therapist has been with us since Max was about three years old, and we have a standing Saturday morning session that Max looks forward to—so much so that he insisted we do it during our recent RV trip.

We were warned, when Max went into high school, that he would get considerable less therapy than before. That's been true, but I pushed to get him an extra PT session there. He has that, speech and OT two times a week each from school, plus one private speech session of private music therapy. Currently they're all being done virtually.

You know how some people dream of winning the lottery and getting a giant new house, a yacht, a personal chef? Me, I'd hire a coordinator to manage all of the therapies.

Max has been a champ about doing therapy online. He'll hold onto a chair and crouch to do knee bends. He practices folding up paper with the school OT. He enunciates words with his speech therapist and even holds a chewy tube in his mouth and bites down on it for oral-motor exercises.

Cut to last Friday. Our sitter was over as I had to catch up on work. Around 1:15, I texted from upstairs to remind her that Max had a make-up session with his school PT.

I emailed the PT to reschedule. That's when she informed me that Max had emailed her to cancel the session. Wait, what?!

Oh, yes. She sent a screen shot of his email. Evidently, he had reached out to her at 11 a.m. to say—spelled exactly as he wrote it—"I'm going to Cancel today I'm going to the park after school."

She wrote back telling him to have a great day and weekend and that she'd see him next week, which is the email the sitter saw and mistakenly assumed the PT was the one who cancelled.

I was curious, and I checked Max's emails. (Bad, bad snooping Mom!) Evidently, after he sent his first email he'd had a pang of guilt and a minute later he messaged "I'm sorry." And then, after she replied, he wrote back to say: "OK thank you you are the best."

We had a little chat. Max explained that he didn't want to have therapies on Fridays, and I totally got that—who doesn't want a day off? I told him that once in a while, it might have to happen if a therapist needed to miss a session on another day, and he grudgingly agreed that would be OK.

So there you go: Max took it upon himself to type a message to his physical therapist and cancel a therapy session because he wanted to go to the park instead. Then he charmingly thanked her. Then he advocated for himself for having a day off.

And that, my friends, is what I call PROGRESS.