Just a teen helping himself to a drink from the fridge 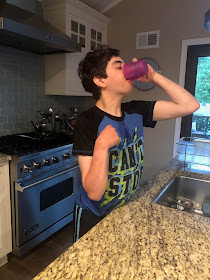 The other night, before Max headed to bed, I found him standing in the kitchen by the fridge, downing water from a cup. This was a little unusual—nobody was there with him, but I figured Dave must have gotten him a drink. Last night, I was in the kitchen when Max walked in, and what happened astounded me.

Max walked over the to the cabinet by the fridge, threw open the door and took out a plastic cup. Then he walked over to the fridge, which has a water filter, and poured himself a cupful. He guzzled it. "AHHHHHHH!" said he, like he was in a commercial for water or cerebral palsy or something. He tossed the cup into the sink, flashed me a grin and started heading upstairs.

WHO IS THIS BOY?! I thought, gleefully.

There are narratives we create about our children, knowingly or unknowingly. One thing I have long mentioned about Max is that he is not the kind of boy who could help himself to stuff from cabinets or the fridge. I've said it to Dave when I've worried about Max's skinniness. I've said it to sitters to help them understand Max's abilities (among other descriptions, of course).

And now, this boy is helping himself to water from the fridge. Maybe he's not yet grabbing snacks but I suddenly have hope that is possible, and I am going to be thinking about ways to enable that with single-size servings of stuff. Although we're in between occupational therapists right now, I am adding it to the list of life skills to work on.

When Max was little, I would not have believed that Max might someday be capable of serving himself a drink of water. Not because I didn't think he was an amazing, determined child, but because his needs were great and it was hard to picture him or life any other sort of way. Back then, we were working on just getting him to be aware of the fact that he needed a drink and to communicate it.

It's been a series of baby steps. Max learned the sign for water. He began to say "water." We tried a series of adaptive cups until we found one he could grasp. He worked hard on holding it and he did, although a lot of liquid would splash down onto his chest. His swallowing abilities evolved (swallowing involves muscles, which can be affected by cerebral palsy) and he was better able to retain liquid in his mouth. He became a boy who loved milkshakes—is there any better inspiration for maneuvering a cup to get every last drop of chocolate goodness? He became a teen who didn't care about having a special cup with handles, he just wanted to grab the same cups the rest of us use and get a drink.