In which Max uses two hands and I get extremely excited 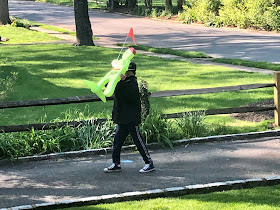 "Two hands, Max, two hands!" is a phrase you're likely to hear at our house, along with "The remote's lost again!" and "What's that smell?" Max naturally prefers to use just his left hand, the more functional one. The stroke he had at birth was worse on his left side, and the left part of your body controls the right. It's made his left hand the dominant one, and the right one the one he often forgets he has.

Max will do anything to avoid using his right hand. Even if he drops something on the floor and it would be way easier to grasp with two hands, he will doggedly attempt to pick it up with his left hand alone until he succeeds and then cling to it for dear life. He has learned to use two hands to drink from a cup, but that's about as far as he'll go unless we prompt him.

The other day, I was sitting on our porch in the afternoon. We've been getting Max to help more around the house—he's in charge of cooking eggs in the morning—and I decided to ask him to bring in our little safety dude. It's this thing, the Step 2 Kid Alert sign, which we put on our street when the kids ride their bikes: 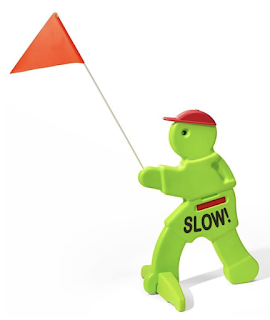 Picking it up with one hand isn't easy. I wasn't really sure how this would go. For once, I decided to not shout "Two hands, Max!" to see how he'd do.

He tried to lift it with one hand. Nope. He tried and tried but: nope. And so, two hands it was. Squee! I watched in amazement as he held little dude high and walked it all the way down the driveway to the garage. He had a proud grin on his face the whole time.