A great way to entertain kids and teens and do good 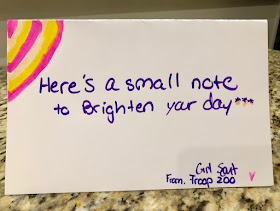 All around me, people in my town are doing their part to help with the pandemic. There's a local Facebook group with hundreds of people sewing masks. There's a 3D Printing Alliance full of people trading tips on printing masks which they then bring to hospitals. There's my neighbor, Kristen, an EMT who works on a volunteer First Aid Squad and who's been getting the word out about safely removing gloves.

I run a Girl Scout troop, and I've been wondering what we could do.  My friend Hedy told me that her daughter and friends had been making cards for the residents of the nursing home her husband run, which sounded great. Last weekend, I called our local senior living home and spoke with the social director. Yes, the residents would be glad to receive some inspirational cards. They were doing OK but were isolated in their rooms, with only the occasional small gathering, and could use some cheer.

Sunday evening, our troop jumped on a Zoom call. For more than an hour, the girls made cards and chatted. Ben joined in, too. "I want you to write 'I love you, Mom!" he said, not totally getting what we were doing. So I wrote that, he drew a rainbow and I wrote a note to the resident explaining that he was a little brother of a Girl Scout.

The next day, I addressed our letters to the social director and left them in our mailbox for our carrier. The social director wrote me a week later to say the cards were a hit, and that some residents had hung them in their rooms. Next Sunday, we're writing notes to residents of a local home for adults with disabilities. (I found out yesterday, after I posted about coronavirus spreading in group homes, that residents of a local group home were doing OK). I asked Max if he wants to join in, and he is going to.